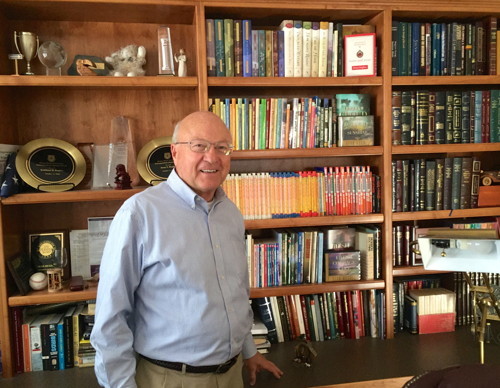 Author Dean Hughes on How His Ancestor Joined the Church After Trying to Punch an Apostle, Polygamy, and His Book "Muddy"

One of author Dean Hughes' favorite pioneer stories starts out with his angry, somewhat intoxicated ancestor trying to punch out an early Latter-day Saint apostle.

As Hughes tells the story, his third-great grandfather, Robert Harris Jr., was skeptical when Wilford Woodruff came to England and began preaching the gospel among the people in their community. But when his wife, Hannah, invited the American missionary into their home, Robert became upset.

After "probably throwing back a few pints" at a local pub and getting worked up, Robert, a boxer, determined to go home and rough then-Elder Woodruff up. But as Robert pulled back his fist, he couldn't throw the punch. Something wouldn't let his arm go. He pulled back again, but couldn't swing. Perhaps there was something to this new religion because he changed his mind, called off his friends and listened to the gospel message. He eventually joined The Church of Jesus Christ of Latter-day Saints, Hughes said.

Robert Harris Jr. became a stalwart Latter-day Saint in Nauvoo, Illinois, and marched west with the Mormon Battalion. He was also among the first called to settle the Muddy River mission in the 1860s.

His ancestor's experience with the Muddy River Mission inspired Hughes to write his latest historical novel, Muddy: Where Faith and Polygamy Collide.

Listen to Dean Hughes talk more about Church history and his new book Muddy in the All In podcast episode below:

"That's why my latest book is called Muddy, Hughes said. "That's how I got interested in it."

The story follows 22-year-old Morgan Davis, who is called by Brigham Young to help settle in the Muddy River Valley. President Young gives Davis two weeks to find a wife, gather supplies, and move south. As the title suggests, a large part of the story centers on the complications of plural marriage in early church history.

Hughes, a prolific author who holds master's and doctorate degrees, is most recognized for his historical fiction series, Children of the Promise. He and his wife Kathleen recently returned from a mission to Beirut, Lebanon. Hughes recently discussed the themes of Muddy in an interview.

This interview has been edited for length and clarity.

Trent Toone: With Muddy, how many books have you published?

TT: If you had to pinpoint one thing that has helped to become successful as an author, what would it be?

DH: It’s been mostly hard work. Some people are gifted. They have great talent and they write fairly easily. I have more desire than talent. I sometimes say tenacity is more than talent. I’ve loved to write and always wanted to write. I started in junior high saying I wanted to be a writer when I grew up. So it’s something I’ve really tried to learn, the craft, and then stay at it.

In a typical day, even now at 75, I will often spend six, seven hours writing all day long. I’ve got to stop doing that. I’m having too much trouble with my back and legs and so forth. But I do work hard and I write and rewrite many, many times. Typically I’ll rewrite a novel six, seven, eight times and then give it to my editor, get it back again and rewrite it again. So I try to refine what I’m doing by polishing. I also work very hard on getting my research right because I think that’s important when you’re doing historical novels.

TT: How many times did you rewrite Muddy?

DH: Somewhere in that range, seven, eight or nine times.

TT: In a note to the reader, you write: "Like many modern Saints, I am the descendant of polygamous families. They made hard choices and lived a difficult law as best they could. It’s time we honor our heritage and not duck our heads and change the subject." What convinced you to take on a topic like plural marriage and write this book?

DH: I got interested in writing about Muddy because my ancestor was there. It wasn’t because I wanted to write a book about polygamy.

I was one of many people who worked on the new Church History series, Saints. I drafted some of the chapters about polygamy, so I started to know quite a bit about it.

When I set out to write about the Muddy River Valley, I realized that quite a few of the people who were down there were polygamists. So I thought there's no way I could write about it without getting into that whole issue. So those two things kind of dovetailed.

DN: How difficult was it to find ways to portray the different perspectives of men and women in the plural marriage storyline?

DH: There are a lot of journals, life histories and books written about polygamy, so there’s a lot of resources and people quoted who would tell about their experience. I saw the perspectives of both men and women, especially women, because a lot of women wrote about their experience. The common theme was "this was the hardest thing I ever did in my life. This was my cross to bear. But I’m not sorry." They saw it as a noble thing they were doing. It wasn’t something they were eager to do, but they felt it was a calling from God to live in that kind of family situation. They tried to get along with their sister wives and tried to accept the situation and live it to the best of their ability. That’s what I mean when I say we should look to that heritage with pride.

The narrative the world has always has and continues put on this is that they were these lascivious men, who collected these young girls and created a kind of harem. The Republican Party after the Civil War called this the twin relics of barbarism — slavery and polygamy — that they had to get rid off. Polygamy was considered on par with slavery, this despicable practice, and it was viewed that the women were completely subservient to the men and it was the men who wanted to practice this.

Well if you know anything at all, if you have any family history, if you have any experience with what polygamy was like, it just wasn’t that way. Most of the people who entered it, especially early on, were New Englanders who had grown up with the idea that one man married one woman. They never thought of living this way. When they first heard of it, it was a terrible idea to them. Later there were more and more people who practiced it, but all of them entered into it with the commitment and the belief that this was a holy order, that this was something they were called by God to do. It was mainly to raise up a righteous posterity and to bless lives by bringing children into the world. There just wasn’t that lascivious aspect the world has claimed.

Now I’m not saying everyone did it right. You’ll see in the book there are examples of men who didn’t treat their wives well just as we have in some marriages now. There were examples of people who misused the principle in various ways and some people were very unhappy with it. Brigham Young told women if you don’t want to stay in this let me know and you can get a divorce. So it was not like they were trapped in it. It was something that most were committed to and loved the results of it. Women often came to love their sister wives, even though it was difficult at first.

TT: As a descendant of polygamous families, is there something you came to appreciate more about that lifestyle and your heritage through writing this book?

DH: You see the quality of the descendants of those marriages. You see that in that commitment and faith that a lot of really great people came down from that heritage. Many of us in the church (lifelong members) now are descended from those families. If this was such a terrible thing as people have portrayed it, then by their fruits we can say no, it’s not true. Great people came from that heritage.

TT: Muddy is book one. What can readers look forward to in the sequel?

DH: The next book deals with the united order, another part of our history people don’t know much about. But they will also see some of the continued, what should I say, complications of polygamy with the main family.

TT: What do you hope they take away from Muddy?

DH: I would hope that people would see that in every age living the gospel and being the kind of person you want to see is difficult, a challenge. Sometimes we talk about the people called the pioneers as though they were some sort of perfect people and that's why they were able to do what they did. A lot of times we say, "Oh, I couldn't have done what they did." I think that's the wrong lesson. Why study church history if we're only going to say they were better than us? We are their children, we are their descendants, and I think we can live through hard times, and in fact, I think we are living through very hard times now. I think we can do it. I think that’s the lesson that yes, in every age there are challenges, but with the gospel and faith we do get through and we’re getting through again now.

Lead image of Dean Hughes and all the books he's written on the shelf behind him – 102 in all. Picture by Lee Benson/Deseret News. 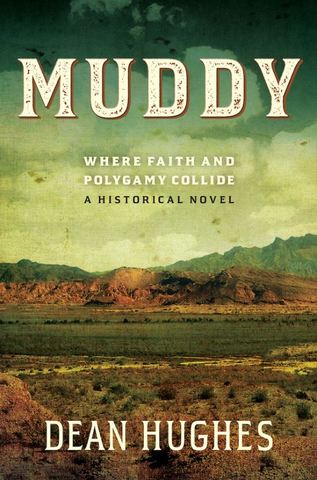 When Brigham Young summons young Morgan Davis to his office and calls him to join other missionaries in settling the Muddy River Valley (what is now Nevada), Morgan can't imagine what lies in store. He has just two weeks to find a wife and gather enough belongings to help start a settlement.

As Morgan and his new bride, Angeline, travel the long trail south in a covered wagon, they fall in love and connect with the other Saints. But the desert location on the Muddy River soon becomes a physical and emotional test for all of them. Together they face difficult requests from Church leaders, multiple failed attempts to settle, deaths of loved ones, and then perhaps the ultimate challenge—polygamy.

What do stalwart members do when faced with conflicting feelings between what their hearts tell them and the hard instructions from Salt Lake City? Morgan and Angeline are about to find out.