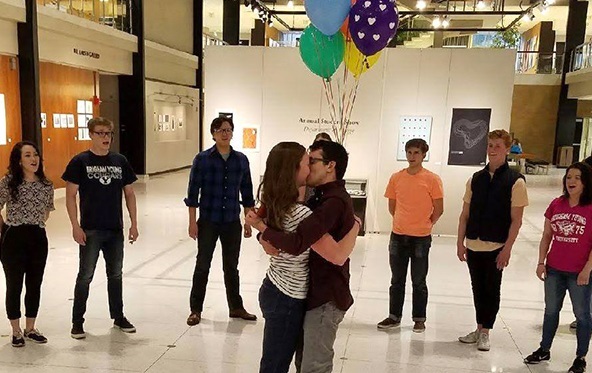 What a creative proposal!

Disney has played an important role in Andrew Justvig’s life.

A Disney aficionado, the BYU theatre student dreams of working for the entertainment beast. He has worked for Walt Disney World. And now Disney has brought him to his fiancee, Carrie Ostler.

And their romance is a Disney movie in the making. The “once upon a time” started in January while the “happily ever after” began on April 10, 2017 when Justvig proposed and Ostler said yes.

Justvig and Ostler met at South End Market, just south of the BYU campus, where Justvig asked Ostler to help him get a Dr. Pepper. As the two conversed, Justvig told Ostler about the play he was performing in at BYU, Disney’s “Mary Poppins,” and invited her to see the play.