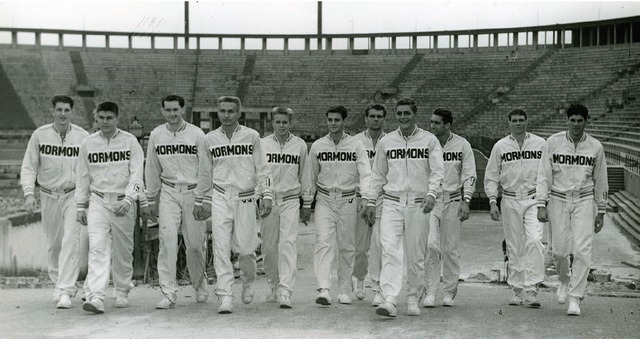 On June 7, 1950, the Brigham Young University men’s basketball team boarded a United Airlines DC-3 in Salt Lake City. Fifty-six hours and five layovers later, the team arrived in Sao Paolo, Brazil. Their mission: bring exposure to The Church of Jesus Christ of Latter-day Saints and BYU by playing basketball games at night and hosting clinics and Church firesides in the afternoon. And wear their sweat suits to identify themselves, which had been tailored to read “Mormons” instead of “Cougars.”

But the exuberant crowds that attended those games could also be volatile and unpredictable. At one game in Rio de Janeiro, the environment was so raucous that the referee kept a loaded .38 revolver on his hip. “It wasn’t that the Brazilian fans were mean-spirited,” remembers Boyd Jarman. “They were just very passionate.”

After several weeks filled with games, basketball clinics, and service, the team was ready for their final game: a rematch with the Sao Paulo Flamingo Club, the best basketball team in Brazil. Though playing the best Brazil had to offer was no small task, the Cougars were well prepared, and they trumped their more experienced opponents 57–39.

The win over the Flamingo Club gave the Cougars a perfect 12–0 record on their preseason trip, and the headline of a local paper in Sao Paulo crowned the BYU basketball players “The Kings of Basketball.”

“The trip to South America brought us together as a team,” says Harold Christensen. “It prepared us for adversity. The time that we spent down there defined us. We became very close, and we’ve stayed close all these years.”

“I am not sure that we would have accomplished some of the things we did later in the season but for the unifying experiences we had down there in South America,” says Coach Stan Watts, who became the winningest basketball coach in BYU history. “Our boys began to understand just how they represented BYU and the Church.”

Rising to the Top

During one game against Niagara, a member of the opposing team hit the deck hard when he got tangled up with a teammate. Joe Richey had been at the edge of the collision and was headed up-court to take advantage of the missing defender, but he turned back to help the fallen player up, relinquishing the edge he had briefly held. The Niagara player who had fallen happened to be a black athlete. In 1950, this act of sportsmanship was notable—significant enough that the local paper mentioned it the next day.

The BYU basketball team successfully defended their championship at the Skyline Conference, which earned them a ranking as one of the top 10 teams in the nation and invitations to both the NIT and NCAA post-season tournaments—the two most important tournaments in college basketball.

As one of the top four teams in the NIT, BYU received a pass for the first round and entered the competition at the quarterfinal round, playing against Saint Louis. The Cougars were just too much for the Billikens, and they ran past them 75–58. After a 69–59 victory over talented Seton Hall in the semi-finals, the stage was set for the championship round. It would be BYU versus the University of Dayton, one last great hurdle to the coveted national championship.

The next morning, during their game-day breakfast at their lower Manhattan hotel, a telegram was delivered to the BYU basketball team. It read:

From the top of the Rockies I send my love and blessings. Many thousands share my pride in your record. I have faith in your abilities. Play hard, play fair, and play to win. God bless you. —President George Albert Smith.

If the Brigham Young University men’s basketball team had any shred of doubt left about what they intended to do that evening, it was wiped out in that moment.

“It was a powerful motivator to have President Smith’s confidence. If I needed any extra inspiration, I got it right then,” Roland Minson later recalled. “Those few words had a tremendous effect upon us. We knew what we had to do.”

With 18,379 people in their seats before tip-off, the NIT championship match was the highest attended college basketball game in the nation in 1951. Among the tiny contingent of BYU fans in Madison Square Garden was BYU alumnus Elder Ezra Taft Benson (Class of 1926) of the Quorum of the Twelve Apostles, who happened to be in New York on official Church business. Following warm-ups, the BYU basketball team retreated to the quiet of the locker room. There the Cougars prayed, according to a TIME Magazine report, not for victory, but that “God would help them play like good sports—and to the best of their ability.”

As tip-off neared, the BYU players and coach huddled up one last time. The crowd was on its feet, and the roar was deafening. Coach Watts looked around the circle of players for a long second and finally shouted above the din, “You know why you are here. You know what to do. Let’s go!”

In the Face of Victory

The BYU starting five of Jerry Romney, Harold Christensen, Roland Minson, Joe Richey, and Mel Hutchins strode to center court. The floor seemed to reverberate from the noise as the official prepared to toss the ball. The referee called the players to attention with a sharp blast from his whistle, and the game was on. Dayton scored four points before BYU even got on the board, but just before halftime, the Cougars pulled ahead to a slight 28–26 lead.

During halftime, BYU President Ernest L. Wilkinson was interviewed on air, where he boasted to millions of listeners about BYU’s “secret weapon” of “superior conditioning.” Wilkinson said that he hoped the Cougars would “demonstrate to the world the physical superiority of young men and young women who abstain from the use of intoxicating beverages and tobacco and who maintain the single standard of morality.”

The university head’s wish came true. As the final buzzer sounded, BYU led 62–43. Senior guard Bob Craig hurled the ball into the stands, and the BYU players and their small contingent of fans erupted onto the court, parading Coach Watts on their shoulders. They had done it. They had played hard, they had played fair, and they had played to win. Brigham Young University had won the national championship.

Not only did the team win the championship, but the favorable press resulting from President Wilkinson’s radio interview and the game the results of the championship game even prompted Apostle Ezra Taft Benson to suggest that winning athletic contests could be of “incalculable” value to the Church’s missionary program.

The Associated Press reported on the game thus: “Without a doubt, the Cougars are the greatest advertisement Provo and Utah as a whole have ever had. . . . The Great ‘Y’ team has done two things thus far—won the NIT, and put their town on the map as it never has been before.”

As time wore on, this group of champions evolved into even greater leaders. Mel Hutchins became the 1952 NBA Rookie of the Year and later a four-time NBA All-Star. More than half of the team members spent time in the armed forces during the Korean War. One of the bench players, Loren C. Dunn, became a member of the First Quorum of the Seventy. Harold Christensen was the president of the California Fresno Mission from 1981–1984. Joe and Sharon Richey served in the same mission in England as Roland and Carol Minson.

They remained a cohesive team throughout their lives. There are postcards sent, letters written, and telephone calls made every year. “There was always a good feeling among the team members,” Harold Christensen said, shortly before his passing away last spring. “The camaraderie was there. There was no ego with any of the players. There never has been. We played as a team.”

To read more about these great players, be sure to read Rocky Steele's book, Forgotten Champions.