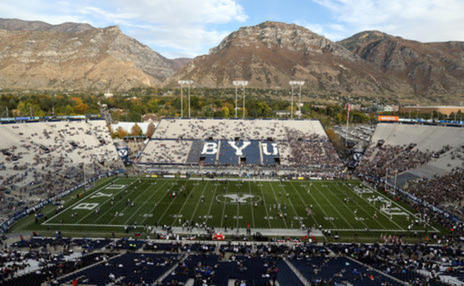 With the Big 12 looking to expand their conference, BYU has been a high contender on the list. But on Monday, 25 LGBT groups and a gay athlete who had never competed at BYU suggested LGBT athletes, coaches, and fans might face discrimination at a competition in Provo. Here's BYU's response.

BYU athletic director Tom Holmoe, who often tweets multiple times a day, stuck to a single message on Twitter all day Tuesday in response to concerns raised by some LGBT groups that lesbian, gay, bisexual or transgender athletes might face discrimination when their teams compete in Provo:

LGBT players, coaches and fans are always welcome to the BYU campus. Everyone should be treated with respect, dignity and love. Tom— Tom Holmoe (@TomHolmoe) August 9, 2016

Holmoe is leading BYU's bid for its sports teams to join the Big 12 conference, which is considering expanding by two to four schools. On Monday, a national LGBT group called Athlete's Ally opposed BYU's bid, in a letter to Big 12 leadership, in part because it claims "LGBT coaches, players and fans who attend and/or compete at any Big 12 events hosted at BYU would be subject to discrimination since BYU remains exempt from Utah’s LGBT nondiscrimination law."