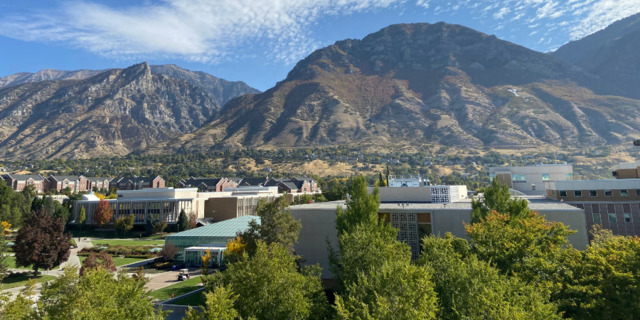 Ben Schilaty: Why I chose to stay at BYU and help LGBTQ students as an Honor Code administrator

byBen Schilaty, excerpted from “A Walk in My Shoes: Questions I'm Often Asked as a Gay Latter-day Saint” | Apr. 20, 2021

As my social work program came to a close, I remember a distinct moment walking across campus to the Marriott Center for a Tuesday devotional. I realized that BYU had become my home and that I wasn’t ready to leave. I felt like I still had more work to do, and more that I could learn at BYU. When an Honor Code administrator position opened up two months after I graduated, I knew I had to apply. Still, I wasn’t sure I wanted to stay in Utah. Having spent five years in Arizona, I had developed quite a distaste for winter, and I wasn’t sure Utah was where I wanted to put down roots. I drove to the temple the day before my job interview to get some direction and clarity.

I walked up to the Provo City Center Temple praying that I would know if the Honor Code job was the right fit for me. As I entered the building, I was unexpectedly greeted by a friend. She hugged me and asked about my life. I told her about a different job I had just interviewed for, and she was happy for me. Then I said I had an interview the next day to work in the Honor Code Office at BYU. She nearly lost it—she got so excited. She told me that I had to get the Honor Code job, that it would be perfect for me, and that I would rock at it. I thought, Wow, I didn’t expect that prayer to be answered so quickly and specifically. As I sat in the temple, I felt that I would be offered the job and that I should accept it.

One of the reasons I applied for the job is because I love LGBTQ BYU students so much. As a student, I worked shoulder-to-shoulder with other LGBTQ students; some of the finest people I’ve ever met. Over and over again I heard students express fear of the Honor Code Office, almost as if there were Honor Code administrators hiding in the bushes ready to jump out and pounce at the slightest hint of a policy violation. I wanted the Honor Code Office to be more accessible to LGBTQ students instead of the scary, amorphous entity that many perceived it to be. I hoped that my presence in the office could mitigate those fears. So after I got hired, I started taking my LGBTQ friends out to lunch, and I’d have them meet me in my office. This way I could introduce them to my colleagues, and my colleagues would get to meet my gay friends. Some of them became regulars and developed relationships with other members of the staff. Charlie Bird, the famed Cosmo the Cougar mascot who went viral for his incredible dance routines, can’t come by without being asked to do some kind of tumbling trick.

Students I didn’t know started to set up appointments to talk with me. When they come in, I open up my cupboard and offer them a LaCroix. I tell them it doesn’t matter which flavor they choose, because they are all equally tasteless. And then we talk about whatever is on their minds. Students have come in and shared some deeply painful experiences. More than once I’ve wept with a student in my office. One student came in to tell me that she was going to transfer to a different school because she felt so unwelcome as a gay woman at BYU. I told her, “I want you to be where you will be happy and where you will thrive, wherever that is. And selfishly, I want you here because this university would be poorer without you. I believe LGBTQ students belong at BYU.” Other times students come in just asking for life advice. I’ve talked to students about how to handle having a crush on a roommate or how to come out in a class, and I’ve talked to many straight students about how they can support their LGBTQ loved ones. I want my office to be a place where any student can come to talk.

► You may also like: ‘I’ll never forget the joy I felt’: Charlie Bird on seeing Ben Schilaty’s new book A Walk in My Shoes

The Honor Code Office director, Kevin Utt, often has meetings with LGBTQ students who have questions about BYU policies. He has invited me to participate in almost all of these meetings. I have been impressed with his kindness as I have observed him sincerely trying to understand each student and their unique circumstances. After each meeting (literally every meeting), Kevin and I debrief what was said. He asks for feedback and makes sure that he said the right thing. All of my colleagues in the Honor Code Office have been very supportive of me.

On a Wednesday evening in January 2020, I participated on a campus-wide panel titled “Navigating Faith and Sexuality.” Instead of going home after work, almost all of my Honor Code Office colleagues came to hear me speak and sat near the front to cheer me on. The next day some of them had questions about things I had said, and the conversation continued. When I started a podcast with Charlie about LGBTQ topics, they asked for the link so they could listen. When I corrected outdated terminology I overheard, they adjusted and used the terms I recommended. When I was asked to give a talk at a large event, they offered to let me practice on them. I was worried that working in the Honor Code Office would restrict the ways that I am able to be an advocate, but instead it has opened up more opportunities.

The same week I was hired at BYU, I was also called to be on the high council in my stake. This was not a call I had expected. When he extended the calling, President Bryan Hopkins said, “I want you to know that we’re not calling you to be ‘the gay high councilor,’ but you can talk about being gay as much or as little as you like. We trust you.” He also told me that this calling came from the Lord, not from him. Then he said that if any stake members complained that there is an openly gay man on the high council, he would personally talk to them. I love serving in the restored Church, and I cannot envision a future in which I am not fully engaged in building Zion.

Unlike when I accepted a stake calling in Tucson, I didn’t cry that night when I wrote in my journal about being called to the high council. Almost five years had passed, and the shame I felt back then was totally gone. This happened as I opened up more, as people began to know all of me, and as I approached God to know how He felt about my orientation. I am no longer ashamed of being gay. There isn’t one way to be gay, and there isn’t one way to be a Latter-day Saint. I am thrilled to be both gay and a Latter-day Saint because that’s who I have felt called to be.

As part of his counsel to his son Helaman, Alma taught how the Liahona had led their fathers to the promised land. He then promised, “For just as surely as this director did bring our fathers, by following its course, to the promised land, shall the words of Christ, if we follow their course, carry us beyond this vale of sorrow into a far better land of promise” (Alma 37:45). I’m grateful that God didn’t answer my thousands of prayers to change my orientation. He knew what I needed better than I did. If I had followed the course I had expected, I would have gotten married at twenty-three, had five kids, and been a high school Spanish teacher somewhere in the Seattle area. That would be a beautiful life. But instead, God led me to a better life for me—a better land of promise. A life that I couldn’t even have conceived of. And I thank God for the life I have.

If you had told me when I was twenty-six that I’d be where I am, doing what I’m doing at thirty-six, I would’ve thought you were crazy. The Apostle Paul taught, “Eye hath not seen, nor ear heard, neither have entered into the heart of man, the things which God hath prepared for them that love him” (1 Corinthians 2:9). Joseph Smith wrote, “Ye cannot behold with your natural eyes, for the present time, the design of your God concerning those things which shall come hereafter, and the glory which shall follow after much tribulation” (D&C 58:3). I can’t see what the rest of my life will look like. I can’t even fully imagine what my life will be like at forty-six, or fifty-six, or beyond, but I have complete confidence that my life will be wonderful.

I sometimes get asked if I’ll be gay in the next life. This was once an important question to me and consumed a lot of my mental energy. At times I thought that I would be straight the moment I left mortality, and at other times I thought that being gay was an eternal part of my soul. However, I feel like I was focused on the wrong question. Now I live in the ambiguity and accept that I can’t even imagine what the next life will be like. What I do know about my future is summed up by the Apostle John: “Beloved, now are we the sons of God, and it doth not yet appear what we shall be: but we know that, when he shall appear, we shall be like him; for we shall see him as he is” (1 John 3:2 ). I am a child of God—that I know for sure—but what my sexual orientation (and so many other things) will be like isn’t as important as whether or not I’m becoming like the Savior. What I do know is that when Christ appears, I want to be like Him.

A Walk in My Shoes: Questions I’m Often Asked as a Gay Latter-day Saint invites readers to act upon that counsel by following the journey of Ben Schilaty, a licensed therapist and BYU Honor Code administrator, as he works to reconcile his faith with his sexual orientation. Each chapter in the book focuses on a question that the author is often asked which he answers using stories from his life and gospel principles. Questions include: Were you born gay? Why do you stay in the Church? Why don’t you marry a woman if marriage is about more than sex? Readers are invited to experience various steps of Ben’s journey with him. A Walk in My Shoes allows readers a glimpse into the life of a single, gay, active Latter-day Saint and provides examples of how they can support and minister to their LGBTQ loved ones. Available now in Deseret Book stores and at DeseretBook.com.