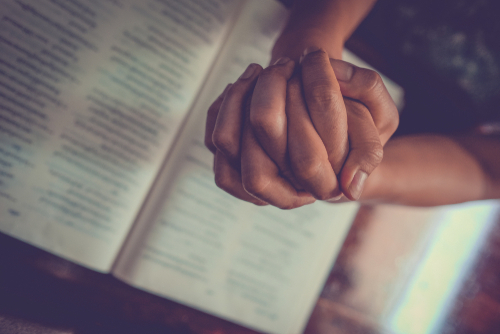 A newlywed couple was discussing comfort food. The bride said, “My family loves Shepherd’s Pie.” The groom had never heard of that. He said, “One of my family’s favorites is Hamburger Bean Casserole.” The wife scrunched up her nose and responded, “I don’t think I would like that.” Little did they know that they were using different names for the exact same dish. How sad it would be if the couple began to argue about whose family’s comfort food was best!

Similarly, two teenage friends were discussing their weekends. The Latter-day Saint said, “Our bishop gave a great talk on the enabling power of the Atonement of Christ.” Her friend, who attended another Christian church reported, “Our pastor spoke about grace.” On the surface, they thought the sermons were different, but it was only the label that was different.

It is no surprise that different Christian groups use different words to describe the same thing. Latter-day Saints say ward. Catholics say parish and some Protestants say congregation. With a little open communication, it is easy to find common ground.

But doctrinal differences are tricky, and discussing them often becomes a battleground. Is grace one of those? It may appear so on the surface, but not deep down.

Deep down, Latter-day Saints and other Christians all rejoice in the grace of Christ. We recognize our complete dependence on the Savior for both justification and sanctification. We know that “redemption cometh in and through the Holy Messiah; for he is full of grace and truth” (2 Nephi 2:6) and “no flesh . . . can dwell in the presence of God, save it be through the merits, and mercy, and grace of the Holy Messiah” (2 Nephi 2:8).

Nevertheless, surface differences can be divisive. Perhaps the reason Latter-day Saints have been hesitant in the past to use the word grace is that we never want to be seen as going to the extreme that many Christians have gone when it comes to this doctrine. Sadly, too many in the world see grace as little more than permission to sin and procrastinate rather than as the enabling power to become “dead to sin” (Romans 6:2), and “born of God” (Mosiah 27:25). Too many live like spiritual couch potatoes and still expect God to beam them up when the time comes. They view grace like a get-out-of-jail-free card, which exempts them from living even the most basic of commandments. They speak endlessly of forgiveness, but rarely of repentance. They see ordinances as nonessential “works” and believe God will overlook their rejection of them because “by grace are ye saved through faith” (Ephesians 2:8). Latter-day Saints agree with Christian authors who label such views as “cheap grace” (Dietrich Bonhoeffer The Cost of Discipleship [New York: Touchstone, 1995], 43-45) or “easy-believism that makes no moral demands on the lives of sinners” (John MacArthur The Gospel According to Jesus [Grand Rapids, Michigan: Zondervan, 1988], 15-16).

In the same way, perhaps the reason other Christians have been hesitant in the past to accept Latter-day Saints’ use of the word “grace” is that they also hear us say things like, “God helps those who help themselves,” or, “We’ve got to meet God halfway.” Too many of us view grace as a final boost into celestial glory once we have gotten as far as we can on our own steam. We speak often of repentance but struggle to feel forgiven—especially when we are tempted with the same sins repeatedly. Our pioneer heritage has enthroned hard work, grit, self-control, and willpower above all other virtues. We roll up our sleeves, put our “shoulder[s] to the wheel” (Hymns, no. 252), and “save ourselves with all our dead” (Hymns, no. 5). Instead of feeling safe and confident in God’s care, we never quite feel good enough. We awake early, go to bed late, read, pray, serve in callings, and still feel like we are falling short. We become so focused on checking items off our to-do lists that we forget why God gave us those lists in the first place. We read about good examples and instead of feeling inspired, we feel discouraged. This attitude sometimes breeds a culture of unrealistic expectations, perfectionism, and comparison that affects health and happiness.

Author Robert L. Millet calls both these extremes “theological traps” (By Grace Are We Saved [Salt Lake City: Bookcraft, 1989], 4) or the “perils of grace” and reminds us that in reality, faith and works are not at odds with each other: “Faith always manifests itself in faithfulness. Salvation may come by grace alone, but grace is never alone” (“Perils of Grace,” in BYU Studies Quarterly 53, no. 2 [2014], 10). We must get beyond surface differences and realize that, deep down, grace is common ground and not a battleground. How should we respond when other Christians ask, “Have you been saved by grace?” We should answer with an enthusiastic and heartfelt, “Yes!” Let us not argue about whether we are eating Shepherd’s Pie or Hamburger Bean Casserole. Let us just enjoy the comfort food together!

If there is a doctrinal difference that needs more discussion and open communication, it is the word saved. What sets Latter-day Saints apart from other Christians is not a reluctance to acknowledge our full and complete dependence on Christ’s grace but rather the possession of a full and complete understanding of salvation. Even scholars outside the Church have recognized that Latter-day Saints teach the most fully developed understanding of salvation, afterlife, and heaven than any other Christian church (see Colleen McDannel and Bernhard Lang, Heaven: A History [New Haven, Connecticut: Yale University Press, 1988]).

President Dallin H. Oaks has taught, “As Latter-day Saints use the words saved and salvation, there are at least six different meanings” (“Have You Been Saved?” Ensign, May 1998, 55). Through His grace, the Savior offers victory over death, sin, our worst selves, ignorance, and hell. Ultimately, He offers the greatest victory of all in the form of exaltation.

Latter-day Saints need never to hesitate to use the word grace. It already fills our scriptures and hymns. Let it fill our talks, prayers, and testimonies. Let us rejoice in the enabling power of Christ that His Atonement makes possible and let us be grateful for our additional knowledge that, through His grace, “the Lord worketh in many ways to the salvation of his people” (Alma 24:27; italics added).

"Have you been changed by grace?" In this insightful book, Brad Wilcox explores this life-altering question in depth. Christians throughout the centuries have used grace to describe God's favor, goodwill, and love. However, grace is more than a description of God's attributes. It is the help, power, and strength He offers as we choose to engage with Him in striving to attain those attributes. Available now at Deseret Book stores and DeseretBook.com.