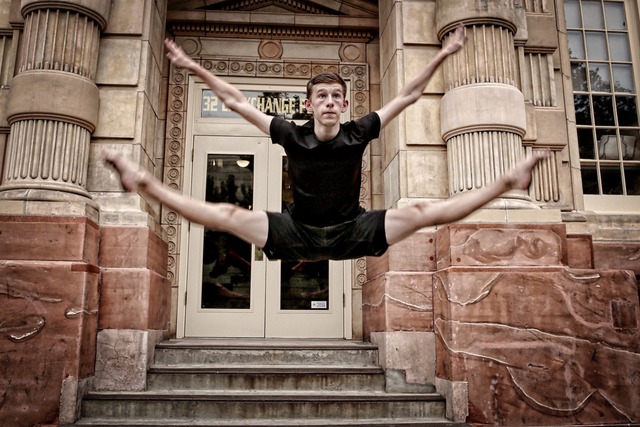 Despite his incredible success at just 18, Tade Biesinger is going to put his training on hold to serve a mission.

Tade Biesinger has always had a knack for rhythm and movement.

The 18-year-old senior at Bountiful High School has danced in competitions throughout the country as Billy Elliot on Broadway and London’s West End and will soon perform in Pioneer Theatre Company’s “Newsies,” but it all started with a simple children’s song.

“When he was 12 months old, one of the songs he liked was ‘The Wheels on the Bus.’ I remember when my wife and I would sing that to him and he couldn’t talk, but when it came time to go ‘swish, swish, swish’ or something, he’d go ‘dah, dah, dah,’” said Clint Biesinger, Tade Biesinger’s dad. “He just always had a sense of rhythm.”

That natural rhythm led to neighborhood gym classes by the time Biesinger was 5 or 6, formal dance classes by 7, winning national dance competitions by 9 and being cast in the title role of “Billy Elliot the Musical” — the Tony Award-winning musical with music by Elton John — by 11.

Mormon Life BroadwayBroadway,Mormon Life
Comments and feedback can be sent to feedback@ldsliving.com