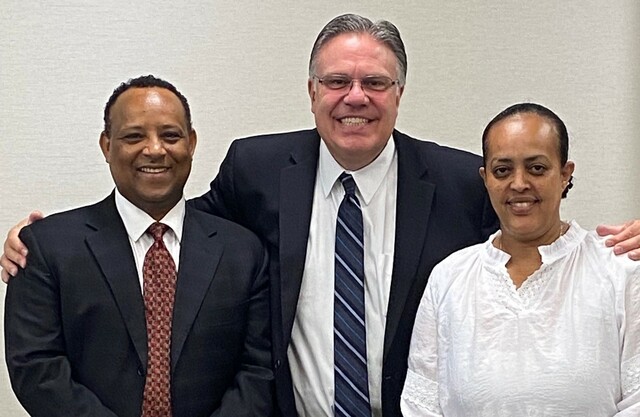 A little over a month ago, LDS Living published a story about Betty Zermariam and Woudneh Redahegn, a remarkable couple from Ethiopia who have had a great spiritual and temporal impact on their country.

I was surprised when a few days later I opened my email inbox to see a message from Brother Brad Wilcox, Second Counselor in the Young Men General Presidency. I had never received an email from Brother Wilcox before and wasn’t even sure how he had found my contact information. I eagerly opened the message, and there my surprise continued.

Brother Wilcox explained that in the 1960s, when he was about 5 years old, his family had moved to Ethiopia for a few years. He explained, “My parents are gone now, but my brothers all have a soft spot in our hearts for Ethiopia and were thrilled to read about this family and the good they are doing.” He then invited me and Betty and Woudneh’s family, who now live in Utah, to come to the Church Office Building so he and his three brothers and their wives could meet this amazing family.

Most would never guess that Brother Wilcox, from Provo, Utah, found his passion for education and the beginnings of his testimony of the gospel halfway across the world in Ethiopia. But his childhood experiences are inextricably intertwined in the life of this BYU professor and Church leader—making him the disciple of Christ he is today. 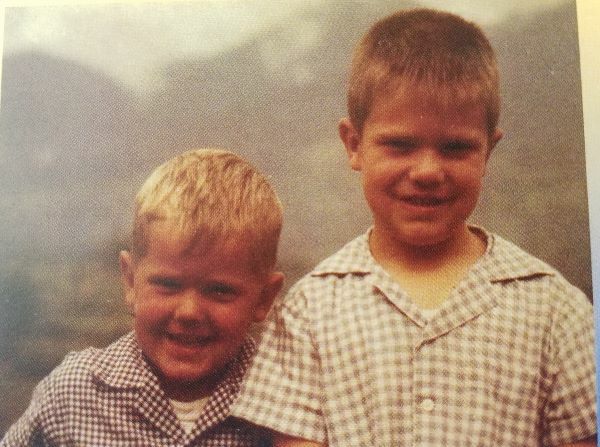 Betty, Woudneh, and four of their children, and I met Brother Wilcox and his family at the Church Office building on a Tuesday morning. As Betty and Woudneh walked in from the parking garage, Brother Wilcox hugged them with the excitement and sincerity of someone greeting longtime friends. After introductions were made, our group made the short walk to the Relief Society Building where Brother Wilcox gave us a tour of the various rooms and explained their use. 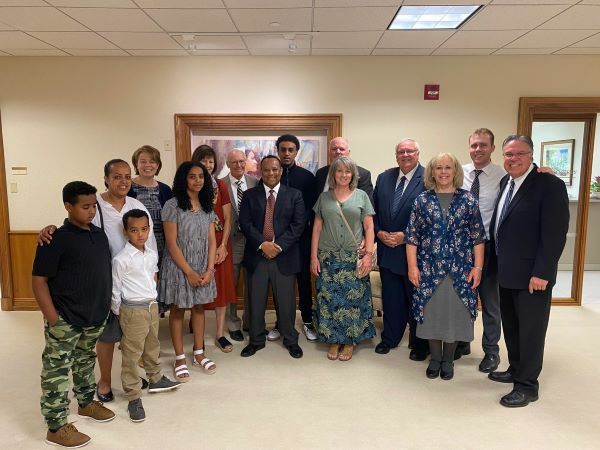 After our tour of the Relief Society building, we returned to the Church Office Building and took the elevator to the 24th floor. Brother Wilcox invited everyone to look out the windows for a bird’s-eye view of the Salt Lake Temple construction before we moved into a conference room where we learned a bit about how the Wilcox family’s time in Ethiopia influenced the rest of their lives.

Discovering a Passion for Education in Ethiopia

Brother Wilcox’s father, Ray T. Wilcox, was part of a team contracted by the US agency of international development to work with Haile Selassie I University (now called Addis Ababa University), in the capital city of Addis Ababa. They set up a teacher training program aimed at improving the quality and quantity of teachers in the country. Wayne, the oldest brother, has the most memories of the family traveling to cities and villages throughout the country and the international school he and his brothers attended with people from many different countries. 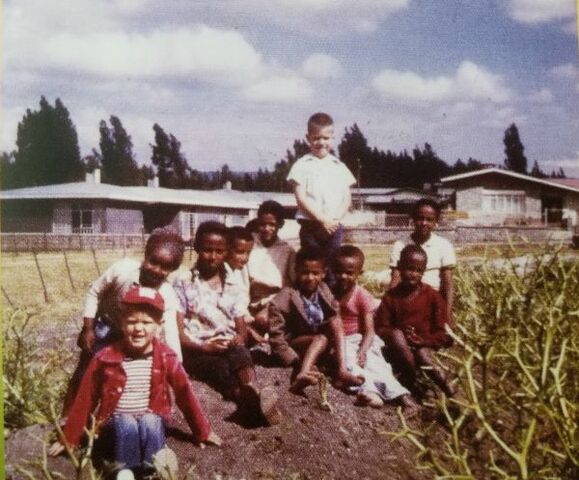 While in Africa, young Brad became accustomed to being surrounded by people of many different races—so much so, that when his family moved back to the US, he came home crying from school because his dominantly white classroom was so unlike what he’d known in Africa, and it scared him.

Brother Wilcox’s experience in Ethiopia deeply affected him, even at such a young age. He observed firsthand the value of education and how it can change the course of people’s lives.

“As an adult now, I realize so many things in my life go back to Ethiopia,” Brother Wilcox says. “I value education because I saw how important that was. Here a lot kids said, ‘I hate school! I hate reading!’ And I thought, ‘No, ‘I love school! I love books!’ And then kids said, ‘I hate school lunch!’ And I would think, ‘Oh, no, this is such a blessing to have this school lunch.’”

Later in life, Brother Wilcox went on to earn a bachelor’s degree in elementary education and a master’s degree in teaching and learning from Brigham Young University, then a doctorate degree in literacy education from the University of Wyoming. His three brothers also earned degrees in education, and his mother, Val C. Wilcox, became a teacher upon returning from Africa and taught second grade for 20 years.

Finding a Testimony in Ethiopia

But a love for education isn’t the only thing Brother Wilcox picked up in Ethiopia. He also says that it was there that he “learned what it was to be a Christian.”

The Wilcox family held church meetings in the homes of a small group of Latter-day Saint families who were there for the same reason they were. Primary and Sunday School classes were held in various bedrooms. 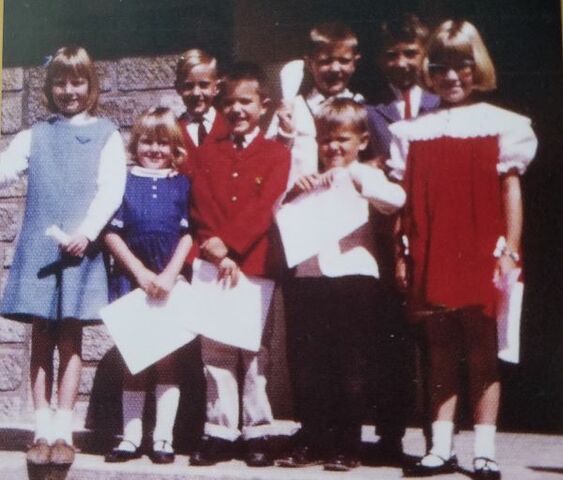 The primary group of the Addis Ababa branch

Brother Wilcox’s older brother, Roger, turned 8 years old in Ethiopia and was baptized in a swimming pool called Sodere, just outside of the city. The pool was near a natural spring right next to a river full of crocodiles and hippos.

“Roger was glad he wasn’t baptized [in the river],” Brother Wilcox joked.

The Latter-day Saint families living in Ethiopia at that time were under the Swiss Mission and counseled not to proselyte, which was difficult for Brother Wilcox’s parents because they wanted to share the gospel with the people they were working with. But because this was before the revelation on the priesthood in 1978, there would be no one with priesthood keys to keep the Church going when the families left.

“When the [priesthood] revelation came, my mom and dad were so excited because they knew what this would mean for Ethiopia. . . [Many years later,] when my mom read an article from Church News about Ethiopians going to the temple in Ghana, she just cried and cried. She said, ‘This is what we were praying for, that one day these people would have the gospel and access to a temple,’” Brother Wilcox says. Betty and Woudueh shared that they were the ones who prepared those first groups of Saints to go to the temple with the help of the temple patron fund.

Brother Wilcox shared two distinct memories of Ethiopia that shaped his own testimony. Young Brad noticed that many people had the Coptic cross (also known as an Ethiopian cross) tattooed on their foreheads. The symbol is made up of two bold lines of equal length that intersect at right angles. When he asked his mother why people had the cross, she responded that it was because they are Christians.

“And [then] I said, ‘I want one. I’m a Christian. I want to have a cross on my forehead,” Brad remembers. His mother replied that being a Christian is firstly about what you believe, what you feel, and how you treat other people.

“That is such a vivid memory for me,” Brother Wilcox says, “And it’s a lesson that was taught in Africa.” 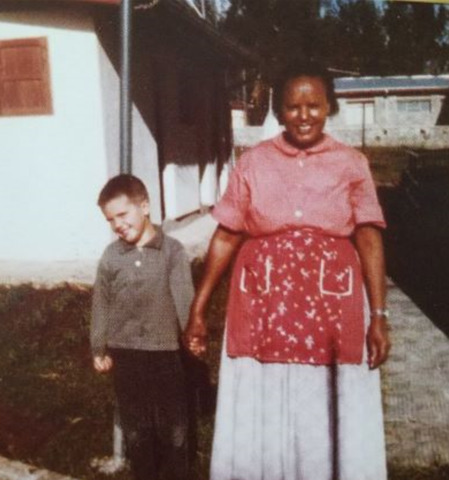 Young Brad with his friend Lucia

On another day, Haile Selassie, who was then the emperor of Ethiopia, passed by in his car. As he went by, people chanted, “The Lion of Judah! The Lion of Judah!” Again, Brother Wilcox’s mother saw an important teaching moment.

“I remember my mom looking at my younger brother Chris and me and saying, ‘He is not the Lion of Judah. Jesus is the Lion of Judah,” Brother Wilcox recalls. “There are so many things that formulated my young faith in Ethiopia, so I guess [you could say] I’m an Ethiopian convert!”

The Wilcox family and Betty and Woudneh’s family are optimistic about the future of the Church in Ethiopia. A significant sign of progress was the announcement of the Ethiopia Addis Ababa Mission in 2019. Previously, Ethiopia was included in the Uganda Kampala Mission, which is an English-speaking mission. But now that the country has a mission of its own, missionaries are learning Amharic, one of the official languages of Ethiopia, thereby overcoming the language barrier that had impeded Church growth.

“I think Ethiopia has such a bright future, especially as the gospel is taught and accepted,” Brother Wilcox says. “It has been great for my family to meet Betty and Woudneh and some of their children. Today, two pioneering families for the Church in Ethiopia finally met and became friends. It has been thrilling.” 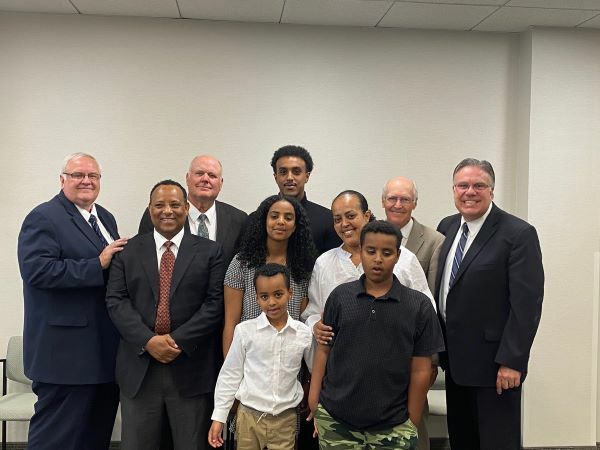 The Wilcox brothers with Betty and Woudneh and four of their children (their oldest daughter is on a mission in Nevada).

Photos courtesy of the Wilcox family.