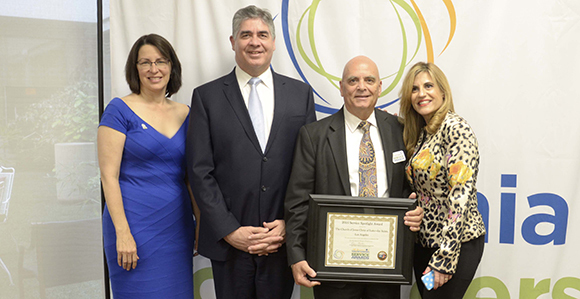 An Area Seventy who, along with thousands of other Saints, volunteered in the 2015 Special Olympics said that their work will yield "long-term benefits for the Church in dozens of communities and will leave lasting impressions on the foreign athletes from 165 nations as they continually reflect on their experiences during the Olympic Games.”

Last summer, waves of Church members—between 10,000 and 15,000—hosted and cheered the athletes of the 2015 Special Olympics World Games in Los Angeles. In recognition of their acts of service, California Gov. Jerry Brown presented the Church with the Governor’s 2016 Volunteering and Service Spotlight Award—the highest honor the governor bestows for volunteerism.

Gov. Brown called the Church and seven other category winners “California heroes” who have ”gone above and beyond in the world of service and volunteerism.” The Spotlight Award honors “a group or individual who has uniquely met a community need with the power of service.”

The ceremony was held April 7 in the Governor’s Office at the State Capitol in Sacramento.

Mormon Life California ServiceCalifornia,Service,Mormon Life
Comments and feedback can be sent to feedback@ldsliving.com