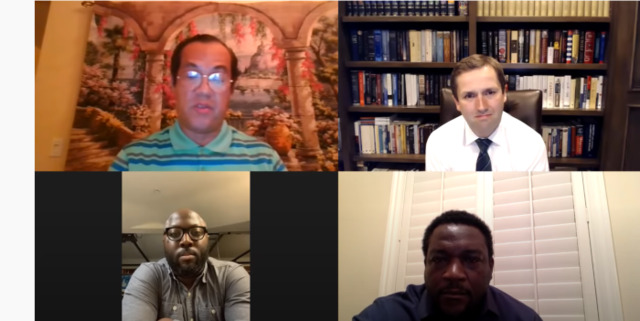 Given recent events, the topic of racism is at the forefront of people's minds. On Monday, President Nelson released a joint op-ed with the NAACP in which he wrote, “Solutions will come as we open our hearts to those whose lives are different than our own, as we work to build bonds of genuine friendship, and as we see each other as the brothers and sisters we are—for we are all children of a loving God.”

Wanting to increase members' ability to empathize within his own stake, Stake President Blaine Hill Evanson of the Laguna Niguel California Stake, hosted a Zoom call discussion with three black men in his stake to discuss their feelings about recent escalating racial tensions, and some of their experiences with race as black men in America and in the Church.

“This is not going to be a political or ideological discussion,” President Evanson said. “Our goal is to foster listening and understanding as to why so many people, including brothers and sisters in our wards and stake family, are hurting so that we can mourn with and comfort them as we’ve covenanted to do.”

The three men participating were born and raised in different states and joined the Church at different times, which brought a wide bandwidth of experiences to the discussion, and the men’s willingness to share their passionate feelings about race provided an emotional depth.

President Evanson posed three discussion points and then closed the conversation by asking each man to bear his testimony.

President Evanson asked each man to describe how they felt and what thoughts went through their minds when they heard the news of George Floyd’s death. (The men’s answers have been edited for clarity and brevity. View the full discussion here.)

“How many times do we have to see the same story, the same tragedy, over and over and over again? It is completely sad,” said Robert Brown. Brown grew up in Yazoo City, Mississippi, and joined the Church while attending high school in Chicago, Illinois.

“It becomes personal because as a black man you understand what this means. You understand that at any moment that could have been any one of us because racism exists. Being targeted because of the color of your skin exists,” he continued. “[It was] painful, [I was] upset, and just downright tired of it to be exact.”

Kenneth Roberts, who was baptized in 2006, added, “This was an incredulous, heartwrenching experience for me. Now it is etched in my mind and millions of others across the world."

Adam Cubbage, a lifelong member of the Church from Savannah, Georgia, also expressed pain over the event. “To see what happened to George Floyd, it just pushes you over the top mentally and emotionally. You don’t want to keep seeing it,” he said.

Brown, Roberts, and Cubbage did not have to think long when President Evanson asked them about their experiences with racial profiling or being treated like a suspect.

Brown said that racial profiling has been a part of his life for as long as he can remember.

“Being born in Mississippi, one of the things you learn very quickly is that you’re black, and that comes with understanding what that means. For me, being racial[ly] profiled was like eating breakfast,” said Brown.

He recalled one instance in which he was driving home with his family after having to put their dog down when they were pulled over by the police. The cop wanted to know if everyone in the car was there on his or her own free will.

“I can’t emphasize enough how comfortable I have become [to] being harassed because I just assumed that was the America that I lived in,” said Brown.

Roberts commented that he has never been treated like a suspect, but that he has experienced discrimination based on racial prejudice. His son, however, a BYU student and returned missionary, once had the police called on him while he was going door to door selling pest control. The neighbors had reported a “black man soliciting in their area.” Encounters like this have had an impact on the family's lives.

“We have to make sure our son’s vehicle is properly maintained and has current insurance and registrations so that if he is stopped, he is in compliance. And [we tell him] to always have his BYU school ID on him—always. So that if he is encountered by the police, he knows what to say and how to act to keep out of harm’s way,” said Roberts.

What Church members can to do help

The last question discussed by the group was what Church members can do to support the black community. Roberts said people need to acknowledge racism occurs daily in America and that those in positions of power should seek to provide educational and professional development opportunities to people of color.

Brown said people need to make a deliberate effort to show that they care about the black community.

Cubbage stressed the importance of taking the time to become educated on issues that concern the black community.

“Make sure that you are finding resources to understand what black people are talking about and to educate others when you learn it,” he said.

The discussion closed with each brother sharing their testimony.

“I testify of knowing the value of the truths in the gospel of this Church. I testify that it has developed a character in my two sons and my daughters. I testify that by living as disciples of Jesus Christ, children are anchored in good words and deeds, which protect them in these turbulent times. And I thank the Lord for his tender mercies during this time of great tragedy in our country,” said Roberts.

Cubbage reflected on some of the racism his mother experienced from Church members when she first joined, and how she always chose to stay anyway. Her example has been a guiding force in his life.

“I know Christ is the Savior. I know we are God’s children and He loves each and every one of us, and I know this is the true Church. And that is something I have to work very hard to reinforce every single day,” he said.