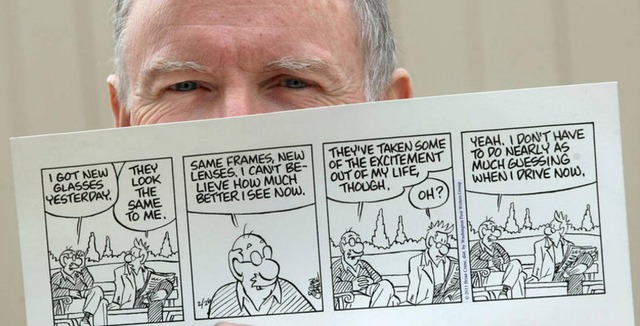 Can You Spot LDS Temples and the "Ensign" in this Syndicated, Award-Winning Comic Strip?

For those who regularly read the Pickles comic strip, you might have noticed the tell-tale signs that its creator, Brian Crane, is a Mormon.

From clean humor and strong family values to pictures of LDS temples in the background, Crane provides quite a few subtle hints about his faith in his work.

Originally Crane would fill blank walls or magazines with mountain scenes, "Then I thought, 'Why don't I put something better?'"

And that something better just happened to be putting LDS temples or copies of Church magazines into his strip.

"It was a little inside wink and nod," he told the Deseret News. "And people did notice. I started getting emails wondering if I was LDS. I can't preach religion, but it's another way to portray an LDS family."

In addition, on the Pickles Facebook page, many pictures of Brian Crane at church or with his family regularly appear.

Can you spot any LDS signs in these comics?

So, every time you read the daily comics, look out for Pickles and you'll be sure to enjoy some clean comedy and maybe even see an LDS temple.

For more about Pickles, visit www.picklescomic.com.