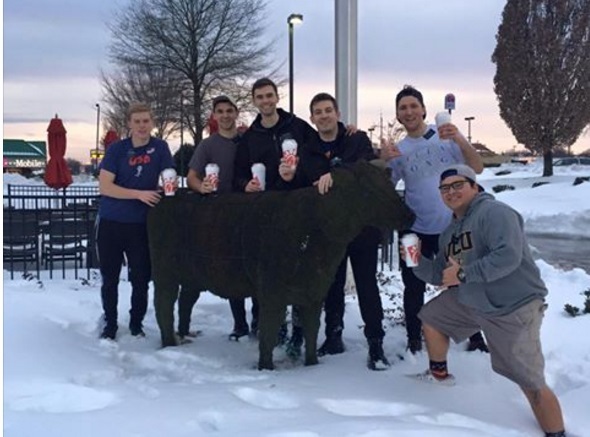 Recently, a Chick-fil-A in Virginia posted a picture on their Facebook page of six LDS missionaries ankle-deep in the snow. Some of these missionaries seem to be used to the cold weather and wintry conditions, being outside in a hoody and shorts. Proud mother Samantha Burila spoke up that her son was the one in the shorts and VCU sweatshirt. A Utah-native, this Elder apparently isn't deterred by the snow.

HUGE SHOUT OUT to these guys who spent all afternoon pushing stuck cars up the icy hill. Thanks for serving the community and being rockstars!

Posted by Chick fil A Colonial Heights on Monday, January 25, 2016

And neither were the rest. Apparently, the missionaries spent their P-day shoveling out and pushing stuck cars up an icy hill near the restaurant. In wonderful missionary fashion, they put everything on hold to help others. And it looks like they might have gotten some free refreshments out of it.

Share this!!! These guys are serving their church by giving back to the community for the next 2 years! They were Awsm today! In the 10 mins we were waiting they helped several cars get unstuck! #faithrestoredPosted by Colleen Murphy on Monday, January 25, 2016

A video of their service was posted to one of their beneficiaries', Facebook pages, and Chick-fil-A's shout out was reposted on LDS Missionaries' Facebook page.

P-DAY EXERCISEThese missionaries from the Virginia Richmond LDS Mission spent their P-Day getting dozens of cars...Posted by LDS Missionaries on Tuesday, January 26, 2016

With news about their good work spreading fast, the positive comments keep rolling in:

"Thank you, Elder!! You made a lot of stranded peoples days!! May God bless you ALL!! You were definitely HEAVEN SENT today!" --Sheryl Beenken

"Mormon missionaries, doing what they do best, serving others." --Jeremy Barnes

"This warms a moms heart! I claim the tall one in the middle. Great work VRM and all missionaries everywhere!" --Melanie Allsop Carlson

"Love the Missionaries!!! They are loving examples of charity--the pure love of Christ:-)" --Connie Rappleye Bean