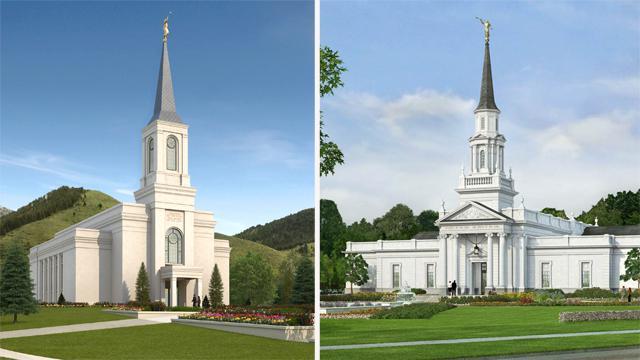 With 150 temples operating worldwide and 23 announced or under construction, the First Presidency announced open house and dedication dates for two new temples soon to be open in the United States: the Star Valley Wyoming and Hartford Connecticut Temples.

The Star Valley Wyoming Temple will be the first temple dedicated in Wyoming. Though not announced until October 1, 2011, an apostle in the Quorum of the Twelve, Moses Thatcher, prophesied of this temple back in the 1800s.

According to LDS Church Temples:"Thatcher first came to the valley in the late 1870s, looking for a suitable location where colonizing Latter-day Saints could settle. Looking over the beautiful valley, he declared, 'I hereby name this valley Star Valley because it is the star of all valleys.' He later returned with Elder Charles C. Rich, a senior apostle, to dedicate the valley for Mormon settlement.

"On July 3, 1894, Church officer George Goddard gave a report on his travels to Star Valley, as recorded in the Deseret Weekly. He referenced a prophecy given by Elder Moses Thatcher in his description of the temple bench: 'A fine tract of bench land on the eastern portion of Afton will afford a beautiful site for a Temple hereafter to be built, as per prophesy of Elder Moses Thatcher. This bench lies at the mouth of Swift Creek canyon, from whence flows a large stream of pure water, flanked on either side by a park of beautiful swamp pines, many of which are more than 100 feet high.'"

Dedication: Sunday, November 20 at 9:00 a.m., 12:00 p.m., and 3:00 p.m. and it will be broadcast to all the stakes and districts in Connecticut and the Hartford Connecticut Temple district

The Hartford Connecticut Temple will be the second temple dedicated in New England and the first in Connecticut. It was announced by President Thomas S. Monson in the October 2010 general conference. The temple design "is reminiscent of the historic First Church of Christ Congregational church in Farmington, completed in 1772. The grounds are formally landscaped with colorful foliage and curving walkways and parking areas, enclosed by a low New England-style stone fence," according to LDS Church Temples.

"Peter Fishman, owner of the intended site for the temple, initially had reservations about the project until he was shown a rendering of the building and given an explanation of its purpose and operation. '[The Church is] proposing to build an incredibly beautiful, very New England-appropriate temple that is going to be a significant landmark in this town for hundreds of years.' He added, 'I've seen what it's going to look like and it's going to be glorious—like a museum. It's going to be really a fantastic building, exceptionally well-built.'"