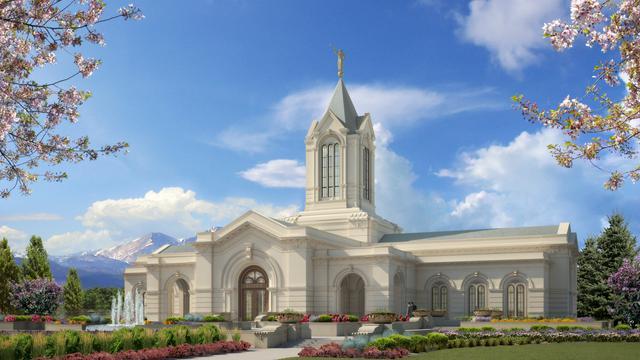 In the spring on 2011, President Monson announced a new temple was going to be built in Colorado, making it the second in the state since the Denver Colorado Temple was dedicated in 1986. Since that time, the construction of the Fort Collins Colorado Temple has seen some setbacks, including vandalism. But now, it's nearing completion.

On February 18, the First Presidency announced that an open house for the Fort Collins Temple will begin Friday, August 19, and go through Saturday, September 10.

The vandals drove one piece of machinery into a structure and spray painted some construction equipment. This type of hostility is not new to the Fort Collins area. Three other churches were burglarized in late July and early August in 2015 and another church was vandalized twice.

Eric Hawkins, a spokesman for the Church, gave a statement last year about the destruction, stating, "We are saddened by the vandalism at the construction site of the Fort Collins Temple of The Church of Jesus Christ of Latter-day Saints and at other places of worship in the area. Both the construction company and the church are working closely with local authorities as they pursue their investigation. Questions regarding the nature of the vandalism should be directed to local law enforcement."

We look forward to seeing this temple finally become operational and serve the members of the Fort Collins area.

Lead image a rendering of the Fort Collins Colorado Temple from Mormon Newsroom.