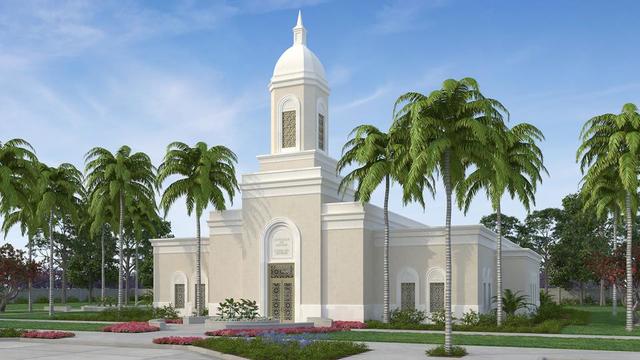 Church Announces Groundbreaking for the First Temple in Cabo Verde

The First Presidency of The Church of Jesus Christ of Latter-day Saints has announced that the groundbreaking for the Praia Cabo Verde Temple will be held May 4, 2019. Elder Paul V. Johnson, president of the Europe Area for the Church, will preside.

Attendance at the site will be by invitation only. It is anticipated that the groundbreaking services will be transmitted via internet to local meetinghouses within the proposed temple district. Additional details will be forthcoming.

An artist rendering of the temple was also made public Friday. The rendering features a single-story temple with an end spire reflective of the architectural styles in the area. The temple will be built in the capital city of Praia on the island of Santiago and located east of Avenida Cidade de Lisboa in the Tahiti Chã de Areia neighborhood.

This will be the first temple in Cabo Verde, a country of 10 islands off the west coast of Africa. The temple was first announced October 7, 2018, by Church President Russell M. Nelson.

Construction on the temple with an adjacent meetinghouse is expected to begin in 2019 and is anticipated to take about two years to complete.