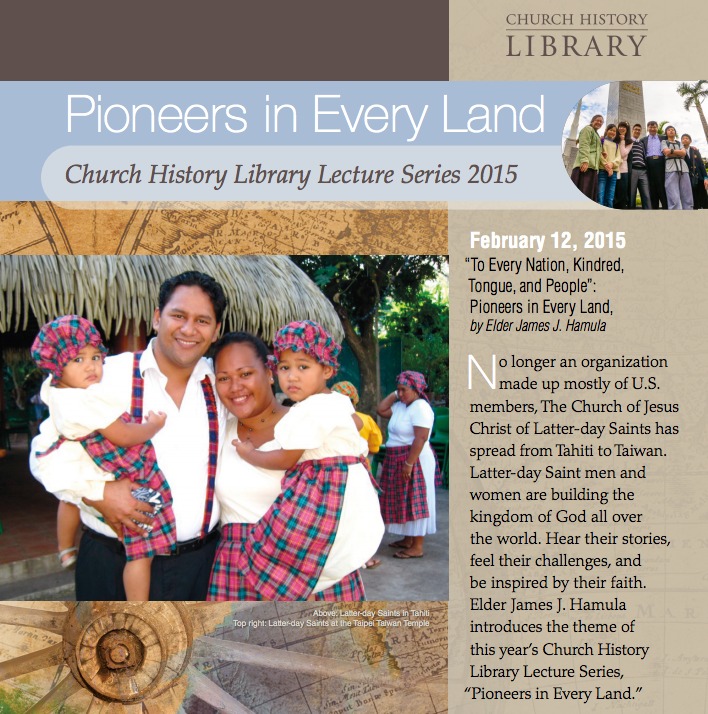 A new 2015 lecture series sponsored by the Church of Jesus Christ of Latter-day Saints will begin starting this Thursday, February 12. The series, which focuses on "Pioneers in Every Land," will begin with an address by Elder James J. Hamula, of the First Quorum of the Seventy and President of the Pacific Area.

Elder Hamula's remarks will introduce this year's lecture series them and cover the topic, "To Every Nation, Kindred, Tongue, and People":

"No longer an organization made up mostly of U.S. members, The Church of Jesus Christ of Latter-day Saints has spread from Tahiti to Taiwan. Latter-day Saint men and women are building the kingdom of God all over the world. Hear their stories, feel their challenges, and be inspired by their faith."

Interested parties can attend the live lectures, which are scheduled to be given every second Thursday at 7pm in the Assembly Hall on Temple Square. Free parking will be available at the Conference Center.

Don't miss the rest of the 2015 lecture lineup:

The Ganges Flows to the Great Salt Lake: Voices of Latter-day Pioneers in India
Taunalyn Rutherford

“The Nethermost Part of My Vineyard”: Learning Lessons of Faith from the History of the Church in Africa
Matthew K. Heiss

China, Japan, and Utah: The Transnational Passages of a Mormon Family
Melissa Inouye

Fire on Ice: The Story of Icelandic Latter-day Saints at Home and Abroad
Fred Woods

“The Power Is in Them”: How Church History Helps Latter-day Saints in Developing Countries
Brett MacDonald

The Church in Italy: A Personal and Ecclesiastical History
Mauro Properzi

For more information about the subject of each lecture, click here.

Those unable to attend the live events will still be able to access the lectures--each will be posted in the weeks following its presentation at history.lds.org.