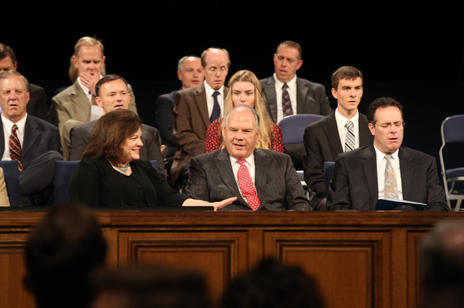 MR says: You won't want to miss this inspired counsel that helps Church members understand how they can champion religious freedom even while they respect the rights of others.

In discussing and encouraging religious freedom and fairness for all, three principles should be observed: "See others through a lens of fairness, treat them with respect and kindness and expect the same treatment in return," Elder Ronald A. Rasband said Sept. 15 to Brigham Young University students.

Elder Rasband, senior president in the Presidency of the Seventy, was the speaker at the regular BYU devotional. . . .

Earlier in his talk, Elder Rasband presented two hypothetical stories to illustrate "what we are talking about when we refer to religious freedom" and invited his listeners to think about how they would feel if they were one of those individuals.

In the first story, a man he called Ethan had recently started his first job in a career he longed for. He was showing dedication and doing excellent work when, one day at lunch, he felt comfortable enough with coworkers to tell them he is gay.

He was disappointed by their cold response, and things became increasingly awkward at work to the point his productivity flagged and he was fired for not keeping up, knowing in his heart he was fired for being gay.