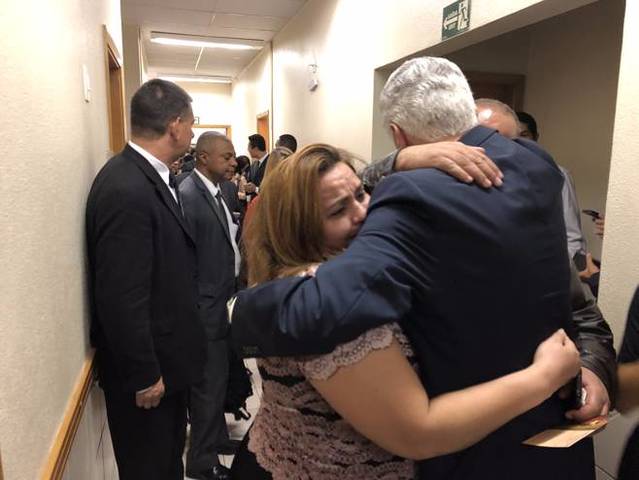 Less than three weeks after a missionary unexpectedly passed away after collapsing during a soccer game with peers, Elder Dieter F. Uchtdorf of the Quorum of the Twelve Apostles met with the missionary’s parents in their Sao Paulo, Brazil, ward meetinghouse and in their home to console them in their grief.

Elder Uchtdorf, who chairs the Missionary Executive Committee for The Church of Jesus Christ of Latter-day Saints, was on assignment recently in Brazil. The fortuitous timing provided him an opportunity to gather with family of Elder Joao Victor Rodrigues Gondim, 20, of Sao Paulo, Brazil, who had been serving in the Portugal Lisbon Mission since July 2017.

“The testimony of the members in the stake concerning ministering is strengthened every time I bear witness that I have seen an Apostle of Jesus Christ ‘weeping with them that weep,’ when I saw him embrace Elder Gondim’s mother and cried with her,” said President Paulo Ferreira of the Sao Paulo Brazil Jaraqua Stake, citing Romans 12:15.

On Monday, Jan. 28, Elder Gondim collapsed during a soccer game with other missionaries and soon passed away.

Story by Scott Taylor, lead image from Church News of Elder Dieter F. Uchtdorf embracing Rusana Gondim Rodrigues and Raimundo Ferreira Rodrigues in a Sao Paulo, Brazil, in the hallway of a meetinghouse on Feb. 17, 2019. Their son, Elder Joao Gondim, who was serving in the Portugal Lisbon Mission, collapsed and passed away unexpectedly after the missionary had been playing in a soccer match.