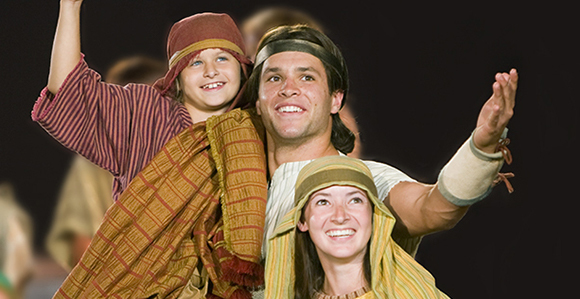 Church Releases 2018 Schedule of Pageants Around the World

Experience the story of Jesus Christ's birth, ministry, selfless death, and miraculous Resurrection through music, dance, and drama. Free tours of the Mesa Arizona Temple Visitors' Center are offered before and after the pageant. Performances are presented in English and Spanish.

Performers participate in the Mesa Easter Pageant on the north lawn of the Mesa Arizona Temple.

Celebrate the restored gospel, the prophetic mission of Joseph Smith, and the legacy of early Latter-day Saints in Nauvoo, Illinois. Enjoy historical vignettes in Old Nauvoo throughout the day and the 1840s Frontier Country Fair pre-show activities at the pageant site before the pageant begins each night. While in the Nauvoo area, drop in at the Nauvoo Visitors’ Center.

A cast and crew of more than 1,100 volunteers will bring early Mormon history in the United States and England to life in two musical productions—the Nauvoo Pageant and the British Pageant. Tuesdays, Thursdays, and Saturdays feature the Nauvoo Pageant, which tells the story of early Latter-day Saint Church members who, in 1839, fled to Nauvoo to escape religious persecution.

The British Pageant, “Truth Will Prevail,” performed Wednesdays and Fridays, tells the history of early Mormonism in the British Isles. Both pageants feature scripts based on actual journals and historic records from the 1800s, as well as traditional and original music.

Presenting both the Nauvoo and British pageants will allow audiences to view the close and continuing relationship between Mormons in the British Isles and the United States. The faith, devotion, and sacrifice of the nineteenth-century British Church helped make possible the flourishing religious community that was established in Nauvoo.