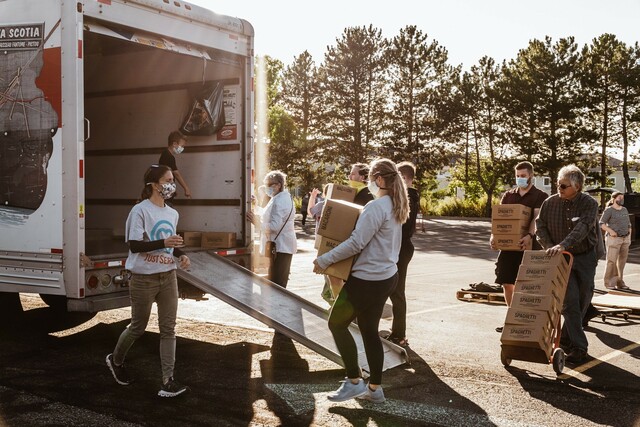 byNewsroom of The Church of Jesus Christ of Latter-day Saints | Sep. 24, 2020

Two hundred deliveries to food pantries and charities in the state of New York are being donated by The Church of Jesus Christ of Latter-day Saints to commemorate the 200th anniversary of the first appearance of God the Father and His Son, Jesus Christ, in Palmyra, New York, to Joseph Smith, prophet and first president of the Church.

Deliveries began in upstate New York in the Rochester area last week, along with deliveries in the New York City area, and will continue for the next several weeks, culminating with the 200th delivery.

Latter-day Saints are partnering with faith-based nonprofit food pantries and other local charities (such as Catholic Charities, Barakah Muslim Charity and the Salvation Army) to provide more than 800 tons of nonperishable food to help people struggling to make ends meet.

The initiative was announced in New York earlier this year by Elder D. Todd Christofferson of the Quorum of the Twelve Apostles, before the COVID-19 pandemic hit the United States.

According to Abubakr Abdul-Latif, the director of operations for Barakah Muslim Charity in Rochester, with the pandemic still affecting upstate New Yorkers, the donated food is a needful gift.

“It’s huge, because you know that [with] COVID, people are losing their jobs and not having enough money and food to sustain them for a week. So this food here can possibly help them,” said Abdul-Latif.

“Through this kind of work, we find that our differences are not big, [and] our commonalities are much bigger,” said Alma Omerhodzic, the charity’s financial director.

“Barakah Muslim Charity operates in one of the poorest neighborhoods in the whole country,” she said. “So even before the current situation with the virus, these [were] really people who [had] great needs, and you can just imagine what COVID has done to this community,” said Omerhodzic.

Benjamin Lee, an operations manager for Eastern Service Workers, said the demand on the group’s emergency food services has “increased tenfold since the beginning of the pandemic.”

“It’s a tremendous boost,” said Lee, referring to the donation his charity received.

“We couldn’t do what we do without our many partners in the community who have stepped up to help,” he said. “At the end of the day, it takes an organized community to meet the needs of the most vulnerable in the community.”

The Eastern Service Workers and Barakah Muslim Charity representatives received 5,000 pounds of food each and say it was the largest single food donation they have ever received.The canned goods and other nonperishable commodities shipped to New York from the Church’s Bishops’ Central Storehouse in Salt Lake City, Utah, include green beans, mashed potato granules, chili, salsa, macaroni, pasta and spaghetti sauce.

The food items were grown, picked and harvested from Church-owned farms in Utah and the Intermountain West, and processed in canneries in Utah.

“The Lord blessed us this year with a bounteous crop, and we’re able to [use this surplus to] distribute these products where they’re most needed,” said Richard Long.

“The wonderful thing about this project is that [New York food pantries are] all doing the same work we’re doing, and they’re able to expand our reach by distributing the products that we provide,” Benjamin Lee added.

Todd Dirrigl, a co-owner of Three Heads Brewing in Rochester, volunteered his company’s forklift and loading dock, and gave his workers a day off so that he could transform the Brockport business into a drop-off location for the Church’s donations while they are distributed to the food pantries nearby.

Dirrigl, who has previously volunteered to help local organizations with food delivery donations, acknowledged that a brewery-Church partnership may sound strange to some, but he got involved with a greater purpose in mind.

“I assume it’s unusual, but you know, we are an open space for anyone,” Dirrigl said. “We are a community-based company, and we are here to help people out.”

The Brockport Department of Public Works and Foodlink also volunteered to be drop-off points for the Church’s regional food deliveries.

“I think we’re now up to 13 local food banks that we have been able to support with this very generous donation that comes from the members of the Church through their humanitarian donations,” said Brenda Carlson, a Latter-day Saint and Relief Society president from the Rochester area.

Carlson and dozens of Latter-day Saints from Rochester volunteered to help unload and sort through more than 29,000 pounds of donated food in preparation for their distribution to local food pantries, including Brighton Food Cupboard, South Wedge Food Program, Cameron Community, House of Mercy, Foodlink and the Geneseo-Groveland Emergency Food Pantry in Livingston County.

The group of helping hands is one of many Latter-day Saint efforts across the state that will continue as more truckloads of food donations arrive.

A second shipment of 48,000 pounds has been sent to the region to help food pantries and nonprofits in Pittsford, Rochester, Macedon, Newark and Farmington-Victor, and other Wayne and Ontario county groups.

Over the course of several weeks, additional truckloads of food will be delivered throughout New York state, in New York City, Syracuse, Albany and Buffalo and many other cities and rural communities. In all, there will be more than three dozen trucks each, carrying 45,000 pounds of food and culminating in the 200th delivery.