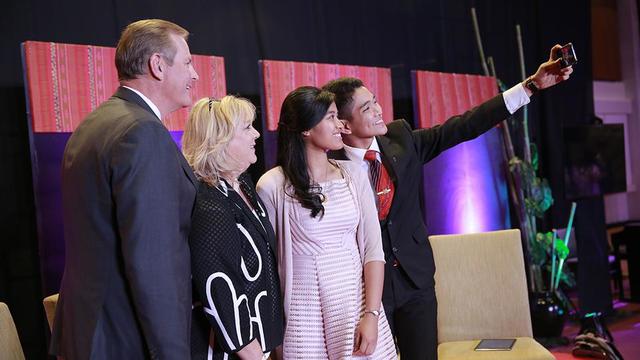 Young members of The Church of Jesus Christ of Latter-day Saints participated in the first live Face to Face broadcast in Asia on Saturday, August 11, 2018.

The special event featured Elder Gary E. Stevenson of the Quorum of the Twelve Apostles and his wife, Lesa. The event originated from the Missionary Training Center in Manila, the capital of the Philippines, and was broadcast to Church members throughout Asia in eight languages.

“You’re representing over half the population of the world in just the broadcast that we’re having today,” said Elder Stevenson as the event began. “Each one of you have a very important role to play in building the kingdom of God on earth.”

The Church’s Face to Face events are live broadcasts to reach Mormon youth around the globe. Guests have included senior Church leaders and Latter-day Saint performers. Prior to the event, youth were encouraged to submit questions to Elder and Sister Stevenson on LDS.org and other social media channels.

Brian Villa, a 17-year-old from Quezon City who attended the Face to Face event, expressed his excitement for the opportunity to experience the discussion in person.

“I’m hoping that my one question that I have in mind right now would be answered,” Brian said, “which is whether I should prioritize mission or my education first.”

Charlene Lee, a 17-year-old from Pasig, was selected to co-host the event. She said the opportunity to get answers to questions from a senior Church leader helps teenagers like her become more enlightened.

“I think it really encourages the youth here to be stronger, to stand their ground and to live up to what the Lord expects them,” she said.

Austine Fernando, 18, who co-hosted the event with Charlene, added that the Face to Face event’s question-and-answer format helps their generation understand how to deal with issues they face.

“Every youth in different countries [has] different needs,” he said. “I think Elder Stevenson coming here [for] the Face to Face is a pretty great blessing.”

Elder Gary E. Stevenson of the Quorum of the Twelve Apostles and his wife, Lesa Jean Stevenson, answer questions during the Face to Face Asia broadcast on August 11, 2018. The broadcast originated from the Manila Missionary Training Center in the Philippines.

Elder and Sister Stevenson share with Asia's Latter-day Saint youth answers to their questions on a variety of topics during the Face to Face broadcast in Manila, Philippines on August 11, 2018.

Youth from the Philippines attend the Face to Face Asia broadcast with Elder and Sister Stevenson on August 11, 2018. The broadcast was distributed by satellite and stream in eight languages including English, Korean, Chinese, Tagalog, Cebuano, Cambodian, Thai, and Vietnamese.

Elder and Sister Stevenson pose with Filipino Church members to take selfies after the Face to Face Asia broadcast on August 11, 2018.

There are more than one million Church members in Asia. In 2017, the Church created the 100thstake in the Philippines because of significant growth.

The Stevensons have a long history in Asia. Elder Stevenson traveled to the continent often during his career as a businessman, and they lived in Japan for seven years fulfilling various Church assignments before Elder Stevenson became an apostle. As a young man he served as a missionary in the Japan Fukuoka Mission.

“It’s been a great blessing in our lives to have the connections here,” said Elder Stevenson. “The members of the church in Asia are just some of the strongest members of the Church you’d find anywhere in the world.”

Elder and Sister Stevenson addressed a number of topics during the event including proper use of technology, missionary service, and the importance of setting priorities. They closed the broadcast by expressing their gratitude for the opportunity to be “face to face” with the Church’s youth.

“I hope that as they asked the questions they found answers that would bring them peace, that would build their testimony and their faith in Heavenly Father and Jesus Christ and his atonement,” said Elder Stevenson. “I hope that they leave here touched in a way that will allow them to touch others.”

Elder and Sister Stevenson will next travel to Osaka, Japan to participate in another regional Face to Face broadcast on Wednesday, August 15, 2018.

Watch a recording of the broadcast on LDS.org. Follow the conversation on the LDS Youth Facebook page or on other social media channels using the hashtag #LDSface2face.