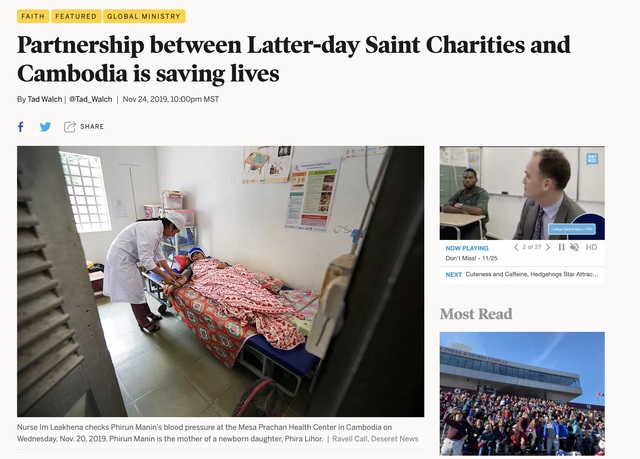 Latter-day Saints in Phnom Penh, Cambodia just received prophetic counsel from Elder D. Todd Christofferson of the Quorum of the Twelve Apostles and President Russell M. Nelson during their recent ministry to the Southeast Asia region.

That isn't the only thing that is blessing the lives of families and individuals of Cambodia, though.

In a land where paramedics aren't available and receiving emergency care in emergency rooms is rare, people in Cambodia struggle receiving cardiac care and with having other necessary medical equipment.

However, with the help of Latter-day Saint Charities who are now in partnership with other medical organizations in Cambodia, people who need adequate medical assistance can now be recipients of such care. Latter-day Saints Charities and others are currently working on improving the basics of emergency care and other conditions at hospitals and health centers in the surrounding areas and villages.

Among others, some of the individuals who are part of making such a big difference have retired from their day-to-day work and are now couple missionaries. An example of this are Bob and Bev Armstrong from Utah. After Bob retired from being a doctor in Manti, Utah, he and his wife arrived in Cambodia just over a year ago and have been making a difference ever since.

“We’ve got a good idea of the needs now,” Bob Armstrong said. “We spent almost a year assessing. Now we’re in gear.”

It's evident that Armstrong and those in the same improvement efforts have been making a visible difference. It's something that President Nelson and Elder Christofferson took note of while there.

“We have seen significant change for the better,” Elder Christofferson said. “This appears to us to be a country that is progressing rapidly. We’re grateful for that because we want our people and all people to prosper...We extend [them] our deepest gratitude. We pray for [their] happiness and [their] success.”

To read more about the progressing changes, inspiring stories, and impacts made by Latter-day Charities and others in the country of Cambodia, click here.