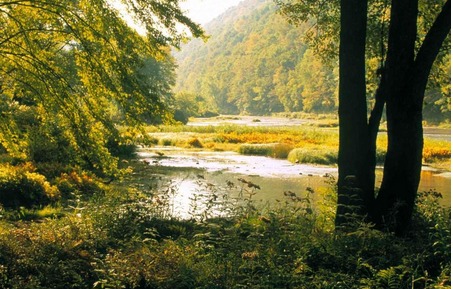 Church to Reopen, Dedicate Site Where the Priesthood Was Restored

The Church will reopen and dedicate the site where the priesthood was restored, near Susquehanna Depot, Pennsylvania.

The site will be open to the public starting August 29, and the dedication will occur September 19 at 11 am. President Russell M. Nelson of the Quorum of the Twelve Apostles will offer the dedicatory prayer. Tickets are required for the onsite dedication, but others can watch a broadcast of the dedication on LDS.org.

The priesthood of God was restored to the earth on May 15, 1829, near Harmony (now Oakland), Pennsylvania.

In April 1829, Oliver Cowdery became a scribe for Joseph Smith. While translating 3 Nephi, the Prophet and Oliver read about the importance of baptism and went to the woods to pray for direction. The resurrected John the Baptist appeared to them on May 15, 1829, and conferred upon them the Aaronic Priesthood. He then commanded Joseph and Oliver to baptize each other in the nearby Susquehanna River. He then commanded them to ordain each other.

Soon afterward, the Melchizedek Priesthood was conferred upon Joseph and Oliver by Apostles Peter, James, and John. Although the exact date and location is not known, historical evidence suggests this happened between May 16 and May 28 of 1829.

In August 1830, Joseph and Emma left Harmony, and in 1919, the home they left behind burned down. From 1947 to 1959, the Church acquired the land where Joseph and Emma lived, as well as approximately 6 acres along the Susquehanna River where the Aaronic Priesthood was restored. It is the last site of the Restoration to be fully restored.