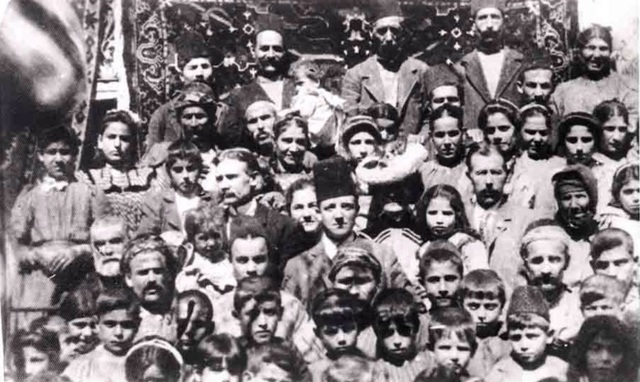 Concentration Camps & Fleeing Their Homes: The Story of Latter-day Saints in Armenia in 1921

"What if their story were my story?" This probing question asked by Sister Linda K. Burton in the women's session of general conference has been one of the clarion calls to Latter-day Saints as they've begun focusing on a new task: supporting refugees. With the new Relief Society initiative, "I Was a Stranger," Saints all over the world are stepping in to see how they can help relieve the refugee crisis.

"There are an estimated 60 million refugees in the world today, which means that '1 in every 122 humans … has been forced to flee their homes,' and half of these are children," Elder Patrick Kearon shared in general conference.

Considering these surprising numbers and the history of the Church, it's clear to see that many refugee stories are the stories of Latter-day Saints—both past and present.

One such story is that of the Saints living in Armenia in the early 20th century.

At the end of World War I, a man named Moses Hindoian returned to his home in Aintab, Turkey, after being released from a prisoner of war camp in Egypt. As a faithful Latter-day Saint, Hindoian was devastated to arrive in his hometown to find his former branch presidency murdered and his fellow members scattered, according to a story on LDS Church News.

Furthermore, despite the world war being over, Aintab quickly became caught in another war when the Ottoman Empire collapsed and French forces and Turkish nationalists fought to determine the fate of the city.

The story of one LDS teenager, Yeranik Gedikian, describes the fate of many of the Armenian Saints. The Juvenile Instructor shares her story as follows:

"While only a girl-bride of 16, Yeranic was taken with the poor unfortunate exiles, east to the great river Euphrates and with hundreds of others slowly rafted down the winding stream for days and weeks to the same old uninviting climes, where the Jews had passed their seven decades bondage under the Babylonians . . .

When the latter-day captives reached the famous town of Deir, near the junction of the Khabour and Euphrates, our little heroine was separated from her young husband, who was taken with three hundred other Armenians, bound together and forced to march over the hills out of sight . . . and there they were all cruelly shot to death. Yeranic was no longer a girl-bride, she was a little orphan-widow. And as she wept in her solitude, she was taken across to the banks of the Khabour right where the prophet Ezekiel had spent his days of sadness and there she, too, poured out a flood of tears and longed almost each day for death."

Yeranic worked as a captive for three long years before escaping and making her way back to Aintab.

Devastating stories like these were what Hindoian returned home to at the end of World War I. However, with the help of the Turkish Mission President Joseph W. Booth, Hindoian was able to obtain passports for 53 Church members to leave Aintab and travel to Aleppo. In answer to their prayers, these Saints were able to leave their war-torn homes as refugees.

However, because of the support and concern of those around the world, including fellow Latter-day Saints, these 53 Armenians reached a new home after four days of hard traveling to find "a welcome with house, room, and fire and comfort in two big places rented especially for them, Khan Jahri in Swaa district and a house in the Jewish quarters. This is an incident wherein the power of God has been clearly manifested, and the Saints are grateful for His wonderful care and mercy” (Joseph W. Booth).

Learn more about this incredible story with the Church's interactive online gallery, "Another Exodus."

Lead image from LDS Church History of the Aintab Branch in 1909, before the war.