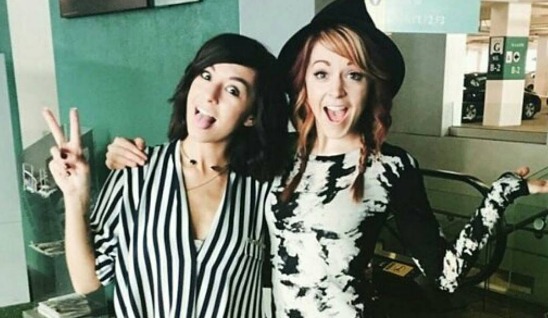 Last weekend, singer Christina Grimmie was shot dead during a meet-and-greet after her concert. Grimmie, a long-time YouTube sensation and recent star of NBC's The Voice, was only 22. In the aftermath of her murder, many Latter-day Saint musicians took to social media to express their grief.

LDS violinist Lindsey Stirling shared a friendship with Grimmie since 2011, when Grimmie tweeted her admiration for Stirling's music. Stirling, who got her start making YouTube videos, shared a picture of the two of them on her Instagram page after the shooting. "My heart hurts," Stirling said. "She was a huge inspiration to me when I was starting YouTube. We were all blessed by her contagious love and amazing talent."

@TheRealGrimmie Hey Christina, thanks so much for the huge shout out! Let's be friends :) — Lindsey Stirling (@LindseyStirling) December 4, 2011

Grimmie, a devout Christian, was vocal about her beliefs and touched the lives of many with her frequent displays of faith. One such person was LDS singer David Archuleta, a fellow singing competition alum who took to Twitter to express his condolences. "I can't sleep because I'm so sad," Archuleta said. He also tweeted a video of Grimmie singing "In Christ Alone," a popular Christian song.

Wow, I can't sleep because I'm so sad. Loss of a great soul with such a gift so unexpectedly. #RIPChristinaGrimmie. https://t.co/jQgYRxHxgP — David Archuleta (@DavidArchie) June 11, 2016

The third-place finalist on Season 6 of The Voice, Grimmie's celebrity was confined to YouTube until her competition debut. One of her fellow contestants on the show was Madilyn Paige, an LDS 16-year-old from Provo who became friends with Grimmie. Paige tweeted a picture of the two, along with a message that read "So hard to believe... Christina was a friend to everyone and always kind. She was an angel. Prayers to her family."

Christina was one of the very first YouTube music stars, gaining millions of subscribers on her channel "zeldaxlove64." An early video on her channel, posted in 2010, featured her good friend Tiffany Alvord, a Latter-day Saint and fellow YouTube singer. The two sang an acoustic rendition of Taio Cruz's hit, "Break Your Heart."

Alvord took to Twitter as news of Grimmie's shooting broke, saying, "I really hope the rumors aren't true, I'm bawling my eyes out at the thought that someone so cruel could do such a thing to someone like her." Another tweet read, "until something is confirmed I'm going to try and stay hopeful!! Maybe she's still fighting, let's stay positive #PrayForChristina."

However, Grimmie's death was confirmed shortly thereafter. In tribute, Alvord posted the following message: "Christina has always been so amazing, so sweet, so caring and loving. I'm so devastated to hear about her passing. Heaven has gained a new angel, but I am so heartbroken . . . I know God is watching over her and we will see her again. May all our thoughts and prayers be with her family at this time. Christina, you will be dearly missed."

Sometimes God allows terrible things to happen in your life and you don't know why. But that doesn't mean you should stop trusting Him.— Christina Grimmie (@TheRealGrimmie) February 21, 2013