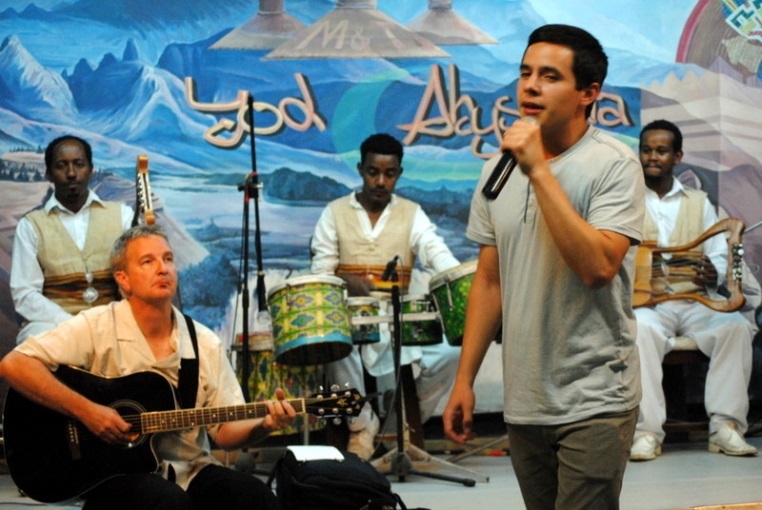 “It wasn’t hard; all I had to do was say no.  It is my life and I know what I believe,” was the response to a question posed to David Archuleta, pop singer of American Idol fame, when asked at a recent fireside if he found conflict between being a musician and a member of the Church.

David, accompanied by three other members of The Church of Jesus Christ of Latter-Day Saints, recently spoke to 125 youth and young single adults at a fireside in Addis Ababa.  The international guests were just completing an Armed Forces Entertainment Tour to the Middle East and found themselves with a 10 hour lay-over in the capital city.  Contact was made with local missionaries serving there and the offer to do a fireside was presented.

At the fireside each of the guests spoke and then time was opened for questions.  Dan Clark, a motivation speaker, challenged those in attendance to develop a relationship with Jesus Christ.  Comedian Jason Hewlett shared the lighter side of many of his life experiences.  His imitations and facial expressions delighted the audience.  Dean Kaelin, musician and voice coach, had served as a young missionary to Rhodesia and South Africa and shared the emotional experience of returning to Africa.  Throughout the fireside David sang four hymns: “If the Savior Stood Beside Me,” “I Know That My Redeemer Lives,” “Nearer My God to Thee,” and “Be Still, My Soul.” Being a recently returned from missionary from Chile, he told the group, “Going on a mission is the most amazing thing I have done in my life.”

Also in attendance at the afternoon fireside was Miss Africa Utah, Muluwerk Hale.  She is an Ethiopian orphan who was adopted nine years ago, at the age of 14, by the Hale family from Ogden, Utah.  She is a university student who is working with an NGO to raise money to educate Ethiopian children.  She also addressed the group and when asked if she had any advice she encouraged young people to continue their education.

Following the events of the afternoon, District President Biru invited the four guests to join the Senior Missionary Couples for dinner and entertainment at an Ethiopian cultural center.  Although David was thousands of miles from home, several in the crowd of over 200 people recognized him and urged the manager of the restaurant to invite him on stage to perform.  Accompanied by his voice coach on guitar, David slipped into “entertainer mode” and delighted the crowd of Ethiopian and foreign guests with his performance of “Stand By Me,” and “Everybody Hurts.”

The tour that brought them to Addis included performances in Kuwait, Afghanistan, Bahrain, and Djibouti.  David shared that he enjoyed meeting the service men and hearing the individual stories of their families at home.  He said the troops had commented, “Thanks for bringing us a piece of home.”

Currently David is writing music and working with song writers in America.  He wants to continue to sing pop music.  At the conclusion of the fireside he told the Ethiopian youth, “I want to sing music that will make me feel what I love.”