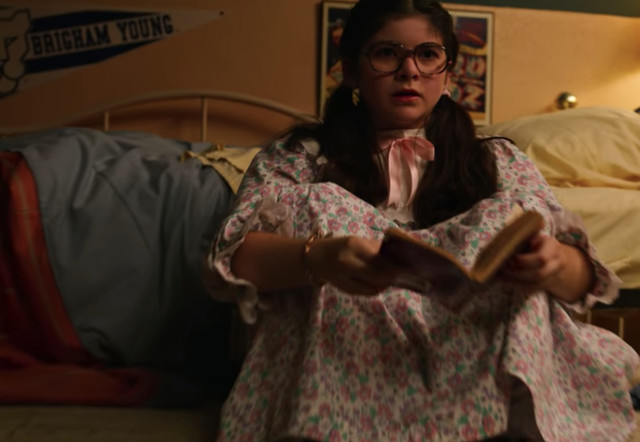 Did You See the BYU Banner in "Stranger Things 3"?

A recent article by Lottie Peterson Johnson from the Deseret News highlights a delightful detail in Stranger Things 3 that most viewers probably missed the first time around—one that is particularly meaningful for BYU fans.

In what is arguably the best scene from season three, Dustin (Gaten Matarazzo) and his Latter-day Saint girlfriend, Suzie (Gabriella Pizzolo), sing the theme song from the 1984 movie Neverending Story.

While rife with nostalgia, humor, and suspense, the scene also has a clever shoutout to BYU with a blue-and-white "Brigham Young" banner featuring the cougar's face.

According to the Deseret News article, "Stranger Things 3 is set in July 1985 — not long after the BYU football team won the national title in 1984. The pennant doesn’t specifically reference that championship, which feels like a missed opportunity, but then again, Suzie doesn’t really seem like the football type."

Find out more about the BYU shoutout and other fun '80s references in Stranger Things 3 at deseretnews.com.