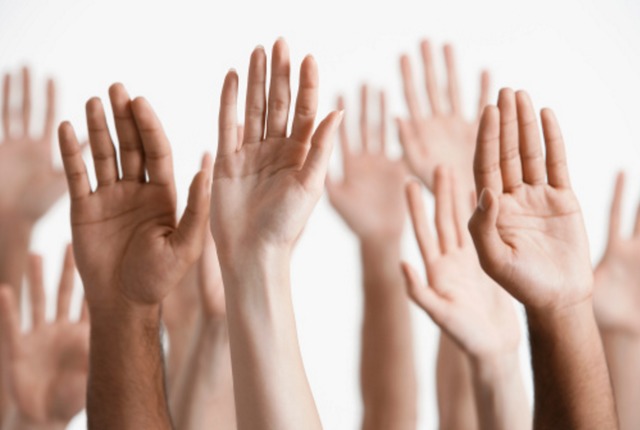 Dissenting Votes at Conference: Everything You Need to Know

Church members participating in the Saturday afternoon session of The 186th Annual General Conference of The Church of Jesus Christ of Latter-day Saints witnessed a sustaining vote that was not unanimous. Here's what you need to know:

In the event that member concerns are raised through dissenting votes, the Church Handbook 2, which applies to all Church meetings, explains the protocol for dealing with these issues:

“If a member in good standing gives a dissenting vote when someone is presented to be sustained, the presiding officer or another assigned priesthood officer confers with the dissenting member in private after the meeting. The officer determines whether the dissenting vote was based on knowledge that the person who was presented is guilty of conduct that should disqualify him or her from serving in the position” (19.3).

During the April 2015 and April 2016 conference, President Uchtdorf designated local stake presidents as the assigned priesthood officer for dissenting members to talk to.

Historical Precedence in the 1800s

Such opposing votes are not unprecedented in the long history of general conference sustainings. Early in Church history, Frederick G. Williams was called to the First Presidency and was not unanimously sustained at the following September conference in 1837. The following summer in 1838, he was released from the presidency with a letter that affirmed his good standing in the Church.

Some 60 years later, a contested sustaining of Church officers occurred in 1898. An estimated 50 members opposed the sustaining of the general officers of the Church when President George Q. Cannon, first counselor in the First Presidency, called for a sustaining vote of the members of the Quorum of the Twelve. The October Conference Report recorded the incident:

All the voting was unanimous, and it was so announced, until the negative vote upon sustaining the members of the Quorum of the Twelve Apostles was called from the Elders. Two of these arose to their feet. President Cannon addressing them, asked who they objected to and for what reason?

Each of these two Elders said he objected to John W. Taylor, and the reason was certain objectionable remarks made by him in Conference on Friday, October 7th.

They were asked if they would come to the stand at the close of the session and see whether Brother Taylor could make the matter right with and satisfy them. Both replied that they were willing to do this.

The voting for members of the Quorum of the Twelve Apostles then went forward uninterrupted and was unanimous, until the negative vote of the entire Congregation was called for. At this point a number of members of the Tabernacle choir, probably from twenty to twenty-five of both sexes, arose to their feet.

On being asked by President Cannon who they objected to and the reason for it, they replied that they objected to John W. Taylor on account of some disparaging remarks he had made in Conference regarding the choir, on Friday, October 7th. They were asked if they were willing that Brother Taylor should personally meet with the choir and endeavor to make the matter right to their satisfaction. They signified that this arrangement was agreeable to them.

Elder Taylor (not the third president of the Church) recanted his remarks, but he later resigned from the Quorum of the Twelve over other issues.

In more recent history, some Church members may recall instances of opposing votes cast in conference. The first opposing vote in the modern era occurred in 1977.

President N. Eldon Tanner, first counselor in the First Presidency, took the vote for the sustaining of the general officers of the Church. The conference record again records the incident:

President Tanner: It seems, President Kimball, that the voting has been unanimous in favor of these officers and General Authorities, and we would ask those new members of the First Quorum of the Seventy to take their seats with their brethren, please.

Voice from the gallery: Did you note my negative vote?

President Tanner: No. Let me see it.

Voice from the gallery: Up here.

President Tanner: Oh, up there. I’m sorry, I couldn’t see up in that gallery. We’ll ask you to see Elder Hinckley immediately after this meeting.

The voice from the gallery belonged to Byron Marchant. He objected over the Church’s stance at the time of not sustaining those of African descent to the priesthood.

The next year, President Tanner addressed the dissenting vote before presenting the officers of the Church for sustaining. He said, “During the last conference we had one dissenting vote, and there was some misunderstanding about it. Someone said that I treated him very curtly. I would just like to explain just what takes place if anyone or a number of people have a dissenting vote. We give them the opportunity to go to one of the General Authorities to explain to that General Authority why they feel the person is not qualified, and if he’s found not qualified, then we take the necessary action.”

A few short years later in 1980, the sustaining of the Church’s general officers was again not unanimous. Three women gave dissenting votes.

We have seen a few dissenting votes in recent years, but in 2014 general conference, Elder Russell M. Nelson (perhaps prophetically) spoke about the importance of sustaining the prophets. He reminded:

When we sustain prophets and other leaders, we invoke the law of common consent, for the Lord said, ‘It shall not be given to any one to go forth to preach my gospel, or to build up my church, except he be ordained by some one who has authority, and it is known to the church that he has authority and has been regularly ordained by the heads of the church.’

This gives us, as members of the Lord’s Church, confidence and faith as we strive to keep the scriptural injunction to heed the Lord’s voice as it comes through the voice of His servants the prophets. All leaders in the Lord’s Church are called by proper authority. No prophet or any other leader in this Church, for that matter, has ever called himself or herself. No prophet has ever been elected. The Lord made that clear when He said, “Ye have not chosen me, but I have chosen you, and ordained you.” You and I do not “vote” on Church leaders at any level. We do, though, have the privilege of sustaining them.