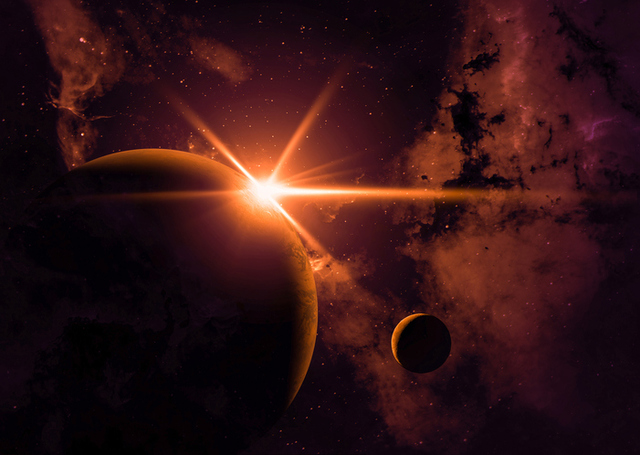 Doctrine and Covenants and Church History Lesson 20: "The Kingdoms of Glory"

The revelation in D&C 76, which we often call The Vision, seems to be a series of six visions. They are:

It behooves us as we study this revelation to look for ourselves. Wilford Woodruff said, “Any man may know through that revelation what his part and condition will be . . . hereafter” (Wilford Woodruff, JD, Vol 22, pp. 146-147).

Joseph Smith said of this vision,

"Nothing could be more pleasing to the Saints upon the order of the Kingdom of the Lord, than the light which burst upon the world through the foregoing vision. Every law, every commandment, every promise, every truth, and every point touching the destiny of man, from Genesis to Revelation, where the purity of the Scriptures remains unsullied by the folly of men, go to show the perfection of the theory (of different degrees of glory in the future life) and witness the fact that that document is a transcript from the records of the eternal world. The sublimity of the idea; the purity of the language; the scope for action; the continued duration for completion, in order that the heirs of salvation may confess the Lord and bow the knee; the rewards for faithfulness, and the punishments for sins, are so much beyond the narrow mindedness of men, that every honest man is constrained to exclaim: 'It came from God!'" (D. H. C. 1:252 3).

1.The kingdoms of glory and "the testimony of Jesus"

Joseph began his “translation” of the Bible on March 8, 1831. He began his work in the New Testament. We know that D&C 76 came as he was working in John 5, and after he had translated John 5:29 (see section heading).

Thus, in about eleven months, he apparently had worked his way through Matthew, Mark, Luke, and John 1-5. Questions about John 5:29 and other verses led to this revelation.

I believe D&C 76 to be one of the most powerful testimonies of Jesus Christ and his atonement ever given to men on this planet. It begins and ends with a testimony of Christ. Look at the first five verses. As mentioned in one of the early lessons of this course of study, one of the miracles of the D&C is that we have a chance to hear the Lord telling us about himself. As you look at D&C 76:1-5 mark those things Jesus wants us to know about him.

- There is no other Savior

- What I begin to do, I finish

- I never change throughout all eternity.

- I have no beginning or end

(I wrote an article for Meridian Magazine about these verses. I called it “Wonders Without Number: A Biographical Sketch of the Lord.” If you are interested, you can find it on line. Or you can email me for a copy at tedgibbons@yahoo.com)

Added to the Savior’s testimony is the testimony of Joseph and Sidney.

20. And we beheld the glory of the Son, on the right hand of the Father, and received of his fulness;

21. And saw the holy angels, and them who are sanctified before his throne, worshiping God, and the Lamb, who worship him forever and ever.

22. And now, after the many testimonies which have been given of him, this is the testimony, last of all which we give of him: That he lives!

23. For we saw him, even on the right hand of God; and we heard the voice bearing record that he is the Only Begotten of the Father

24. That by him, and through him, and of him, the worlds are and were created, and the inhabitants thereof are begotten sons and daughters unto God.

Make a list or a note of the things this testimony teaches about the Savior.

Since our eternal reward is related most closely to our involvement with the “testimony of Jesus,” we must analyze the verses of this section and our own conduct to determine our status.

The word perdition refers to a state of loss or destruction, not a kingdom of glory. Satan was called Perdition (D&C 76:25,26), and those who follow him into this state are called sons of perdition.

The name Lucifer means, literally, the Shining One, (see Bible Dictionary: Lucifer) Both D&C 76:25 and Moses 4:3 tell us that Lucifer was cast out of the presence of God for rebellion. How did the heavens react to his expulsion (see 76:26). What does it mean to you to learn the meaning of his name and that he was a “son of the morning”? (76:27).

With regard to becoming a son of perdition Joseph Smith taught:

“All sins shall be forgiven, except the sin against the Holy Ghost, for Jesus will save all except the sons of perdition. What must a man do to commit the unpardonable sin? He must receive the Holy Ghost, have the heavens opened unto him, and know God, and then sin against Him. After a man has sinned against the Holy Ghost, there is no repentance for him. He has got to say that the sun does not shine while he sees it; he has got to deny Jesus Christ when the heavens have been opened unto him, and to deny the plan of salvation with his eyes open to the truth of it; and from that time he begins to be an enemy. This is the case with many apostates of the Church of Jesus Christ of Latter day Saints" (Teachings, p. 358).

“How much does it take to prepare a man, or woman, or any being, to become angels to the Devil, to suffer with him to all eternity? Just as much as it does to prepare a man to go into the celestial kingdom, into the presence of the Father and the Son, and to be made an heir to his Kingdom, and all his glory, and be crowned with crowns of glory, immortality, and eternal lives” (JD, Vol 3: p.93).

"The sin against the Holy Ghost requires such knowledge that it is manifestly impossible for the rank and file to commit such a sin" (Teachings of Spencer w. Kimball, p. 23).

What does Lucifer do now that he has been cast out into the earth? (D&C 76:29; Rev. 12:17; 13:7) I think that we must never lose sight of this sobering reality. We are at war. What is more, we are under siege—encompassed round about by the wiles and subtleties and machinations of the devil whose only intent is make us miserable as he is miserable (2 Nephi 2:18, 27).

If you have any doubts about this, try an experiment. Tomorrow when you leave your home, check your watch and determine how much time passes before you encounter something with Satanic implications; something, to use the words of Moroni 7, that persuades, invites, or entices to do evil.

“A consuming interest in sex has so penetrated our national culture that it has been estimated we encounter some kind of sexual lure every nine minutes of our waking day. Greece, in the third and second centuries B.C., 'brought sex out into the open in a manner that has yet to be equaled. We know, because there were . . . in those days . . . men who prided themselves on their objectivity as they calmly recorded the distressing picture of whole families getting together to indulge in promiscuous behavior. Adultery, prostitution, homosexuality and even incest were so common that those who indulged were regarded merely as interesting fellows” (Dr. Pitirim A. Sorokin: Time Magazine, 11 Jan . 1954, emphasis added).

Of course, there are other kinds of lures than the sexual ones, but if this was true in 1954, what is the time frame now? We really are encompassed.

D&C 76:101 suggests four things that those who inherit a telestial glory will

not receive. What are they and why are they so significant that their absence will sentence some of God’s children to a kingdom of liars, sorcerers, adulterers, and whoremongers? (See D&C 76:103).

Even though the glory of the telestial kingdom surpasses all understanding (76:86), there are serious restrictions placed on those who inherit this kingdom.

- Even though they have rejected Christ, they will bow the knee and confess (76:110)

- They shall be servants of the Most High; but they can never go where God and Christ are (76:112)

The passages that teach of the terrestrial kingdom tell us that these are people who “are not valiant in the testimony of Jesus” (76:79). You will want to review other statements and descriptions in 76:71-80, 91, 97. But let us consider here for a moment what it means to be valiant. Because the implication here is that those who inherit and inhabit the celestial kingdom were valiant in the testimony of Jesus.

“To be valiant in the testimony of Jesus is to take the Lord’s side on every issue. It is to vote as he would vote. It is to think what he thinks, to believe what he believes, to say what he would say and do what he would do in the same situation. It is to have the mind of Christ and be one with him as he is one with his Father.

“Our doctrine is clear; its application sometimes seems to be more difficult. Perhaps some personal introspection might be helpful. For instance:

“Am I valiant in the testimony of Jesus if my chief interest and concern in life is laying up in store the treasures of the earth, rather than the building up of the kingdom?

“Am I valiant if I have more of this world’s goods than my just needs and wants require and I do not draw from my surplus to support missionary work, build temples, and care for the needy?

“Am I valiant if my approach to the Church and its doctrines is intellectual only, if I am more concerned with having a religious dialogue on this or that point than I am on gaining a personal spiritual experience? . . .

“Am I valiant if I use a boat, live in a country home, or engage in some other recreational pursuit on weekends that takes me away from my spiritual responsibilities?

“Am I valiant if I engage in gambling, play cards, go to pornographic movies, shop on Sunday, wear immodest clothes, or do any of the things that are the accepted way of life among worldly people?

“If we are to gain salvation, we must put first in our lives the things of God’s kingdom. With us it must be the kingdom of God or nothing. We have come out of darkness; ours is the marvelous light of Christ. We must walk in the light” (Bruce R. McConkie, “Be Valiant in the Fight of Faith,” Ensign, Nov. 1974, p. 35).

“Those destined to inherit the terrestrial kingdom are: (1) those who died "without law"—those heathen and pagan people who do not hear the gospel in this life, and who would not accept it with all their hearts should they hear it; (2) those who hear and reject the gospel in this life and then accept it in the spirit world; (3) those "who are honorable men of the earth, who [are] blinded by the craftiness of men"; and (4) those who are lukewarm members of the true church and who have testimonies, but who are not true and faithful in all things” (A New Witness for the Articles of Faith, p. 146).

The verses that describe this kingdom and its inhabitants specify the requirements and opportunities of a celestial existence. The verses also outline the blessings that will attend those who merit such an inheritance.

We are left in wonder at the scope and power of this communication from heaven. What a flood of light it brings to a world floundering in darkness. But of course it is just the beginning:

“I could explain a hundred fold more than I ever have of the glories of the kingdoms manifested to me in the vision, were I permitted, and were the people prepared to receive them . . .” (Joseph Smith, HC, Vol. 5:402).

And even in its brevity and simplicity, it is “the most glorious vision ever received by mortal man” (Bruce R. McConkie: DNTC, Vol 1, p. 195).