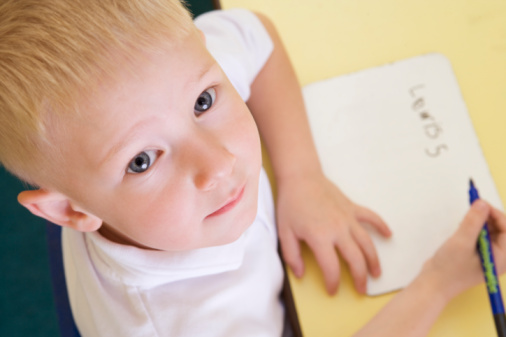 Does Giving Your Children Latter-day Saint Names Affect Their Future?

Picture this: you’re in a Wal-Mart parking lot on a Monday evening (a little before 6 o' clock) and you see a yellow van park across from you. The door opens and kids, all dressed in knee-length shorts and capris, spill out onto the pavement. A mom and a dad join the crew (also dressed in knee length shorts), and together, the family treks into the store to shop for ice cream toppings. If you’re anything like me, your first thought is, “Mormon.”

It’s not always easy to tell if someone is Mormon, but some things (like knee-length shorts and big families) are pretty good hints. Sometimes just a name is a dead giveaway: if a guy introduces himself as Moroni Young, you can be 98% sure he’s Mormon.

What is a Mormon name?

We may not always recognize it, but as Mormons, we definitely have a unique culture, and names are a big part of that. While not every Mormon has a “Mormon” name, there are some trends that spread wide in our culture. (Caveat: not all the trends mentioned below are solely LDS, but they do seem to resonate more strongly and commonly in the Mormon culture.)

But parents who give their kids “Mormon” names don’t seem to recognize that they’re doing it. Mansfield noticed that the mother who had given her kids theme names (like Kyler, Kailen, and Kory) thought that Moroni and Nephi were Mormon names, while Moroni and Nephi’s mom seemed to think that Kyler, Kailen, and Kory were Mormon names. “Nobody thinks they’re doing it,” Mansfield explained. “But a lot of people are.”

Why do parents choose these names?

Do parents give their kids these names so that everyone knows they are Mormon? That’s what Mansfield expected to find, but instead, she found that parents often just wanted to be unique. According to an article in The Week, “Many parents view commonplace names like Thomas or Jane as boring and uncreative,” so they search for something out of the ordinary. Although Book of Mormon names like Ammon and Teancum are becoming more widespread, children with these names most likely won’t share a name with someone in their kindergarten class.

Some parents also give their children unique Mormon names to point them in a positive direction. Perhaps if a couple names their child Moroni, he will grow to be strong and courageous like Captain Moroni, or Ammon will become spiritually powerful and an enormously successful missionary.

A lot of Mormon children are also named after relatives, but it’s often not as simple as naming a kid after dad or grandpa. “Rather than picking a direct line, people pick these convoluted routes up the family tree to find a name,” Mansfield said. “They pick maiden names, middle names, or first names, and change them.” Parents do this so their kids can have unique names, but some also do it to help their children remember their forefathers. Parents want their children to look to their ancestors and remember them, but they also hope to motivate them to do genealogy work.

How do names influence people?

Names have an influence on the way people are viewed by others, but mostly when a name is all that is known about a person. In a controversial 2007 study, researchers concluded that students’ grades often matched their names: those who had names starting with a C or D had lower grade point averages than those whose names started with A or B. Other researchers say there are a disproportionate number of Dennis the dentists and Lauren the lawyers. An Australian study also found political candidates with easily pronounced names fared better than those whose names were not so easily pronounced. And then there’s the Roman expression nomen est omen, or “name is destiny.”

But how does a Mormon name influence the person who lives with it day by day? Mansfield related a story of a woman named Celestial who felt that her name directed her in her life choices. She served a mission and was married in the temple, which she credits to her name. Every time she heard “Celestial,” it reminded her of what she was seeking. She wanted the same for her own daughter, so she named her Himaya, which is Cebuano for “glory.”

Gidianny Gutierrez has another story. Her parents named her Gidianny (pronounced Ji-di-aw-nee) after the name Giddianhi found in 3 Nephi 3:9, which reads, “And behold, I am Giddianhi; and I am the governor of this the secret society of Gadianton.” Gidianny explained that her parents named her after the name Giddianhi, not the person. “They just thought it sounded pretty,” said Gutierrez.

Her name hasn’t led her to secret combinations and guerilla warfare—just a lot of patience as people try to pronounce it correctly. “I understand that my name is difficult,” said Gutierrez. “When I come across a name that I can't pronounce on the first time, I’m reminded that I shouldn’t act rude, offended, or prideful to others about mine.”

Gutierrez even uses her name to make people laugh. When she tells people she’s named after one of the leaders of the Gadianton robbers, she adds, “Don’t worry, I’ve repented,” or “Yeah, I think I’ve represented him well in this life.” And while she doesn’t look to the original Giddianhi as a source of enlightenment, her name influences her in other ways. “It has helped me learn to laugh at myself sometimes,” said Gutierrez. “It has also influenced me by helping me develop patience.”