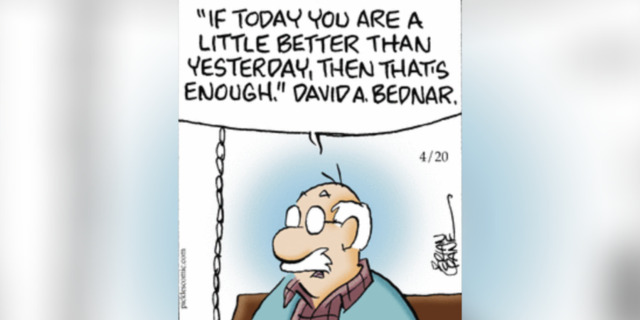 Elder Bednar Was Just Quoted in This National Comic Strip

If you read the comics each day, you may have noticed a familiar name in Monday’s paper—David A. Bednar.

In Monday’s "Pickles" comic strip, Earl is talking with his wife Opal.

Earl: “I came across an inspiring quote this morning.”

Earl: “’If today you are a little better than yesterday, then that’s enough.’ David A. Bednar. And this morning I picked up a Cheerio off the floor without being asked.”

Earl: “Yesterday I would’ve just left it there.”

The quote comes from Elder Bednar of the Quorum of the Twelve Apostles and was shared by the Church as a daily quote in 2018.

This isn’t the first time comic artist Brian Crane, a member of The Church of Jesus Christ of Latter-day Saints, has incorporated a Latter-day Saint element into his comic strip. Crane told Deseret News he created Earl and Opal and the rest of the “Pickles” crew as characters with strong family values.

Those who have watched the characters over time may have noticed small references to Latter-day Saint culture, including a temple in a picture frame and a copy of the Ensign.

Learn more about how artist Brain Crane draws on life, marriage, and aging to create his award-winning comic strip at Deseret News.