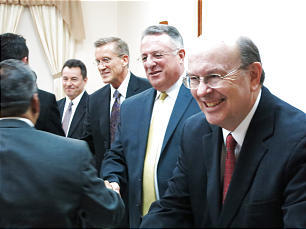 “You are working at a time when the Lord’s work is greatly hastened,” Elder Quentin L. Cook of the Quorum of the Twelve Apostles told a group of more than 700 missionaries from three different missions in Guatemala City during a recent trip to Central America.

“Hastening the work of salvation” was a common theme during Elder Cook’s visit to the area. He was accompanied by his wife, Sister Mary Cook, along with Elder Ulisses Soares of the Presidency of the Seventy, and his wife, Sister Rosana Soares. Also participating was the Central America Area Presidency: Elder Carlos H. Amado, Elder Kevin R. Duncan and Elder Adrian Ochoa and their wives, Sister Mayavel Amado, Sister Nancy Duncan and Sister Nancy Ochoa.

The Brethren visited and spoke with missionaries, local leaders and more than 10,000 members in person and thousands more via the Internet in gatherings across the area from Jan. 17-26.