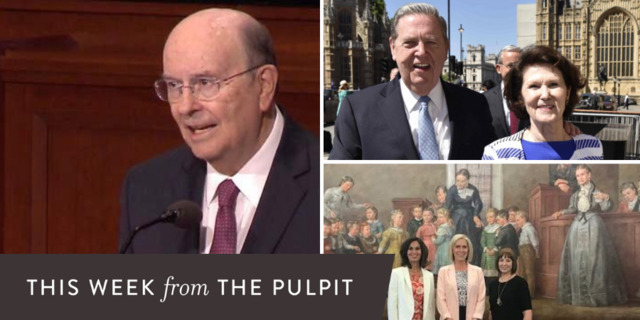 Editor's note: "This week from the pulpit" highlights recent messages by General Authorities, General Officers, and leaders of the Church.

Speaking to faculty and staff at Brigham Young University, Elder Quentin L. Cook noted that when it comes to Church history, “Understanding moments when we have been marginalized and persecuted should give us courage to stand with the marginalized today.” He continued, “Recognizing when we have fallen short should create more desire to do our best today.”

Other messages from Church leaders celebrated notable anniversaries including:

May reading these messages help you see the importance of remembering history.

Elder Cook addressed the BYU faculty and staff at their annual University Conference, encouraging them to have “a laser-like focus on our responsibility to help build faith in Jesus Christ and in His restored gospel.”

His talk, “Be Not Weary in Well Doing for Ye Are Laying the Foundation of Great Work,” addressed several ways educators can help students build faith, as reported by Church News. He discussed being sensitive in creating racial unity, understanding leaders of the past in the context of their time, being Christlike in response to criticism, and defending religious liberty.

“One area that can help us to build faith is to be particularly sensitive in creating unity and being grateful for diversity,” Elder Cook said. “We are in a particularly heated period when deep and personal wrongs have been highlighted among our Black brothers and sisters. We each need to be at the forefront of righteously repenting and following the counsel of President Russell M. Nelson, who asked us ‘to build bridges of cooperation rather than walls of segregation.’”

Brigham Young—the prophet of God for whom this university is named—led the Saints during a tumultuous and difficult period of over three decades. He was a practical and organizational genius. . . . But more than that, he was a deeply spiritual leader who testified boldly of the life and mission of Jesus Christ, who cared deeply about the spiritual and physical welfare of Latter-day Saints, and who sent missionaries throughout the world.

Brigham Young also said things about race that fall short of our standards today. Some of his beliefs and words reflected the culture of his time. During this period, Brigham also taught, with respect to race, “Of one blood has God made all flesh.” “We don’t care about the color.”

Elder Holland has strong ties to the United Kingdom. He developed his testimony as a young full-time missionary in the British Mission and served as the Europe North Area President in the early 1990s. In 1995, shortly after his call to the Quorum of the Twelve Apostles, Elder Holland dedicated the Solihull Ward Chapel in England, the town where he lived for years.

Marking the 25th anniversary of that dedication, Elder Holland was joined by Elder Kearon of the Presidency of the Seventy for a special broadcast to 10 stakes in the Birmingham England Mission, as reported by Church News. Both shared how the Savior brings peace and healing.

Elder Holland noted that the Savior asks us for a broken heart and a contrite spirit. “That’s what we need to be prepared to give. That’s what our sacrificial gift is supposed to be.”

Read a summary of Elder Holland and Elder Kearon’s remarks at Church News.

► You may also like: Elder Holland addresses fear of the future in new message

Celebrating another anniversary, Relief Society General President Jean B. Bingham posted on Facebook in commemoration of Women’s Equality Day in the United States—the day the 19th amendment which gave women the right to vote was added to the United States Constitution.

“Today is important to me because I am reminded of the foundational work done by Relief Society sisters and suffragists who worked tirelessly to make a difference,” President Bingham wrote. “This picture shows some of these great heroes. Standing in a spot that is now part of Temple Square, these Relief Society sisters—including Emmeline B. Wells and Ruth May Fox—stood with each other and with Senator Reed Smoot to advocate for women having the right to vote. Their legacy created a foundation for our Church today, where men and women continue to work together all over the world on important causes.”

► You may also like: Looking back at the remarkable impact of Latter-day Saint women since the Restoration

In other posts related to anniversaries, Primary President Joy D. Jones posted on Facebook about the first Primary meeting held 142 years ago and the visit the Primary General Presidency took to the Farmington Rock Chapel, where the first primary meeting was held.

► You may also like: 142 years ago, the first Primary meeting was held. Here’s some of what’s changed since then

Young Women General President Bonnie H. Cordon issued a second challenge in commemoration of the 150th anniversary of the Young Women organization where she invited young women past and present to “post on social media how your young women leader has blessed your life, and then if you can, reach out. Tell her what she means to you.”

► You may also like: Responding to President Cordon’s invitation, the LDS Living staff pays tribute to our Young Women leaders

Sister Michelle D. Craig, First Counselor in the Young Women General Presidency, posted a tribute to one of her Young Women leaders.

A few days ago, President Bonnie H. Cordon invited us to share about a Young Women leader who has influenced our lives....Posted by Michelle D. Craig on Thursday, August 27, 2020