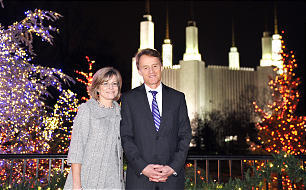 Emphasizing that Christmas traditions of giving are rooted in the life, message and mission of Jesus Christ, Elder D. Todd Christofferson of the Quorum of the Twelve Apostles heralded the Christmas season at the Washington D.C. Temple and Visitors’ Center on Dec. 2. With honored guest, Manuel Sager, Ambassador of Switzerland, Elder Christofferson switched on more than 600,000 lights that will illuminate the temple grounds until Jan. 1, 2014, as part of the annual Festival of Lights.

Other special guests for the lighting ceremony included members of the Washington diplomatic, political, business and religious communities. Also attending the ceremony were Sister Kathy Christofferson and Mrs. Christine Sager. J.W. Marriott Jr. and his wife, Donna, once again hosted the event as they have for 36 years, and Ann Santini of the Office of Public and International Affairs noted that the lights were a beacon to all of Washington, saying “come join us.”