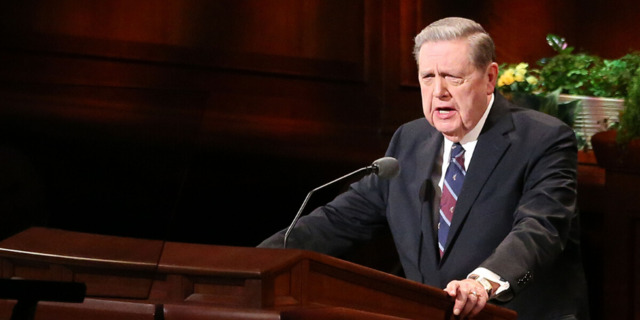 Elder Holland: How to improve even when we’ve failed before

The following is an excerpt from Elder Jeffrey R. Holland's book To My Friends. This excerpt originally ran on LDS Living in December 2014.

As much as our Father in Heaven has warned against sin and continually pleads against committing it, He nevertheless knew, clear back in the premortal councils of heaven, that we wouldn’t do everything right. So He planned for and promised a way out of our problems, described in the scriptures as “the way.” That way out of our problems, “the way, the truth, and the life,” is the Atonement of His perfect, totally obedient Son—the only one in the entire family who would not transgress when He came to earth. Only that Son was worthy enough and therefore capable of lifting our sins from our shoulders and putting them on His.

We shouted for joy at that offer of help, and from that moment on we loved Christ (or certainly should have) because He first loved us. But to take full advantage of the Atonement and obtain forgiveness of those sins, we do have to do some very basic things. We do owe something for this gift. We must have faith in Christ and believe in His redeeming power. We must be honest about our mistakes—confront them, confess them, truly regret them, and forsake them. Then we must vow honestly to live as much like Christ as we possibly can, including following Him in the saving ordinances of the gospel.

First, let’s address the fear that we can’t change, can’t stop making those mistakes, partly because we have tried in the past and failed. . . .

I am not sure what your most serious sins are. Some may be sexual and among the most serious God Himself has decried. Others may be less serious but still wrong. Whatever the list, it’s bound to be long when we add up all the dumb things we’ve done or said or been. And my greatest fear is that you will not believe you can escape from them, that you are convinced your guilt and your continuing mistakes will go on forever. This is a debilitating outlook to have and it can make you sick in your soul. Let me give you a famous example of the impact of such guilt. . . .

What if Alma had not come back? He had made serious mistakes, more serious perhaps than we know. He is described as “a very wicked and an idolatrous man,” one who sought to “destroy the church” and who delighted in rebelling against God. He was, in short, “the very vilest of sinners.” The strongest denunciation came from his own lips when he said to his son Helaman, “I had rebelled against my God. . . . I had murdered many of his children, or rather led them away unto destruction; . . . so great had been my iniquities, that the very thought of coming into the presence of my God did rack my soul with inexpressible horror.”

He may not have been Macbeth, but that is a frightening description of a man’s standing before God. But he came back. Not without anguish and suffering and fear, not without “wading through much tribulation, repenting nigh unto death.” But he paid the full price and came back on the strength of Christ’s love. And every life thereafter, both in the Book of Mormon itself and in our generation, has been enriched because of the life Alma then lived. . . .

Let me say now a word about the other doubt we have—the fear that even if we change, we won’t be forgiven of our sins and mistakes in life, therefore the damage has been done and change means nothing. First of all, let me readily admit we sometimes feel this way because others—ironically, those we call our friends—won’t let us feel we can be forgiven.

I grew up in the same town as a boy who had no father and precious few of the other blessings of life. The young men in our community found it easy to tease and taunt and bully him. And in the process of it all, he made some mistakes. He began to drink and smoke, and gospel principles that had never meant much to him now meant almost nothing. He had been cast in a role by Latter-Day Saint friends who should have known better, and he began to play the part perfectly. Soon he drank even more, went to school even less, and went to church not at all. Then one day he was gone. Some said they thought he had joined the army.

Fifteen or sixteen years later he came back home. At least, he tried to come home. He had found the significance of the gospel in his life. He had married a wonderful girl, and they had a family. But he discovered something upon his return. He had changed, but some of his old friends hadn’t—and they were unwilling to let him escape his past.

This was hard for him and hard for his family. Eventually they moved away. For reasons that don’t need to be detailed here, the story goes on to a very unhappy ending. He died just a few years later, in his early forties. That’s too young to die these days, and it’s certainly too young to die when true friends, forgiving friends, could have helped you live.

When a battered, weary swimmer tries to get back to shore after having fought strong winds and rough waves that he should never have challenged in the first place, those of us who might have had better judgment, or perhaps just better luck, ought not to row out to his side, beat him with our oars, and shove his head back underwater. That’s not what boats were made for. But some of us do that to each other.

Even if we admit our errors, confess them, and want to repent, want to change, can we be forgiven? The answer is yes, yes, yes! That is what the Atonement of Jesus Christ is all about. . . .

We all have need to repent, and we all have the obligation to forgive. True friends, magnanimous friends, genuine Latter-day Saint friends will help each other do that. I am especially moved by a line from W.W. Phelps’s poignant letter to the Prophet: “I want to be saved if my friends will help me.”22 For the nearly fifty years since I first read those words, I have thought perhaps they contained the sweetest insight into the true purpose of friendship that has ever been written. Friends, true friends, lead people out of sin, not into it. They help each other repent, and they forgive past mistakes in the process. Be a true friend to those who need your strength and integrity.

One of the most encouraging and compassionate parables in all of holy writ representing the need for repentance and the power of forgiveness is the story of the prodigal son, in which the anxious father, seeing his son returning, “had compassion, and ran, and fell on his neck, and kissed him.” God bless us to help each other to “come to ourselves,” as the scriptures say the prodigal son did. God bless us to help each other come back home. “I want to be saved if my friends will help me.” I am grateful for the greatest friend any of us could ever have, in time or eternity, the Lord Jesus Christ, who has made repentance possible and who is the majestic personification of forgiveness itself. I don’t know whether He will want to fall on our neck and kiss us, but for such atoning compassion I know we will want to fall at His feet and kiss Him. May we change this very day if we need to. May we embrace the Atonement and repent of our sins in anticipation of such an encounter with God.

To read more inspiring counsel from Elder Holland, check out To My Friends.

"If you need a burden lifted, I want you to imagine I am in a personal, private, closed-door chat with you. I want to help you if I can." With those words, Elder Jeffrey R. Holland invites every reader of his latest book to become a friend, to receive instruction and encouragement, counsel and comfort, in any circumstance.