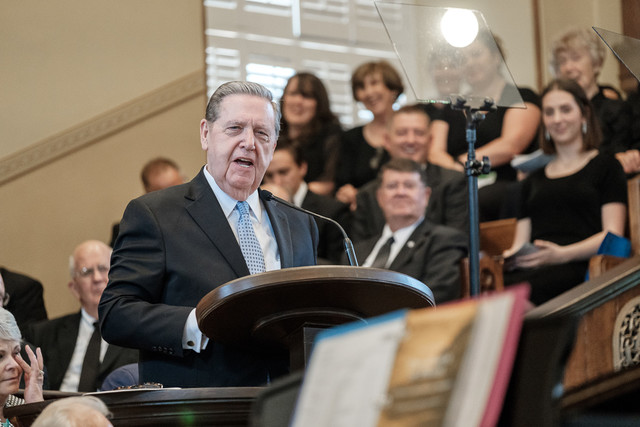 This is a treasure to us in part because of nearly 150 years of meaning and memory and sacrifice,” said Elder Holland, who offered Saturday’s dedicatory prayer of the St. George Tabernacle.

Nearly a century and a half after it was originally planned, constructed and dedicated by 19th century pioneers, a renovated and refreshed St. George Tabernacle was rededicated Saturday morning, with a pair of the city’s “native sons” returning to share memories and provide their presence and prayer.

The two — Elder Jeffrey R. Holland, of The Church of Jesus Christ of Latter-day Saints’ Quorum of the Twelve Apostles, and Elder Steven E. Snow, church historian and General Authority Seventy — recalled personal experiences in the building as they participated in Saturday’s rededication of the sandstone tabernacle that sits in the center of the city. A religious and community focal point since it was started in 1863 and dedicated in 1876, the tabernacle hosted meetings and activities well before it was completely finished.

Both Elder Holland and Elder Snow used the word “treasure” to describe the tabernacle.