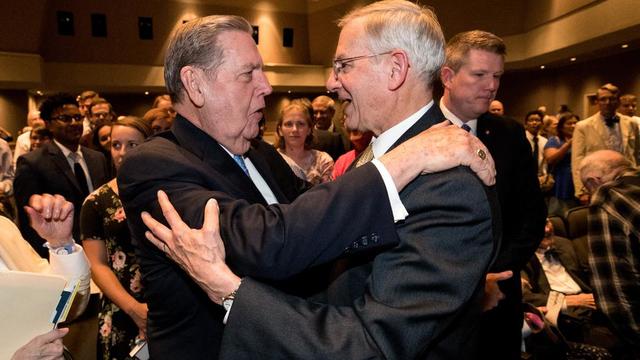 What a powerful testimony from an apostle of the Lord: "Nevertheless, the reality of those plates — the substance of them, if you will — and the evidence that comes from them in the form of the Book of Mormon is at the heart, at the very center, of the hope and testimony and conviction of this work that is unshakably within me forever."

Fifty years ago, an LDS Church missionary serving in Germany discovered in the Book of Mormon a literary technique known as chiasmus, a device evident in early Semitic writings such as the Holy Bible. This week, 50 years later to the day, scholars and students joined a pair of LDS Church leaders and interested individuals to celebrate both the discovery and the discoverer, with chiasmus underscoring the linguistic aspects of historical origins of the Book of Mormon.

Elder Jeffrey R. Holland, a member of The Church of Jesus Christ of Latter-day Saints’ Quorum of the Twelve Apostles, concluded the “Chiasmus Jubilee” commemoration Wednesday night at Brigham Young University, reminding guests that the spirit of revelation — including one’s testimony of the Book of Mormon — comes through a process of “engaging the head as well as the heart,” with “the force of fact as well as the force of feeling.”

He added: “Our testimonies aren’t dependent on evidence. We still need always and forever that spiritual confirmation in the heart of which we’ve all spoken. But to not seek for and not to acknowledge intellectual, documentable support for our belief, when it is available, is to needlessly limit an otherwise incomparably strong theological position and deny us a persuasive vocabulary in the latter-day arena of religious investigation in a sectarian debate."