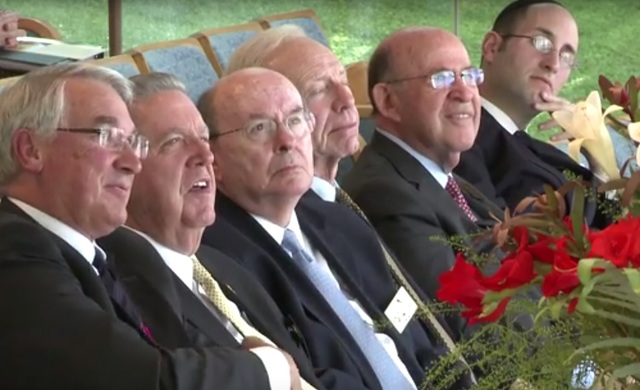 Elder Jeffrey R. Holland, Elder Quentin L. Cook, and Elder James J. Hamula of the Seventy met with prominent Jewish leaders from the United States at the Mount of Olives on Thursday to commemorate the 175th anniversary of Apostle Orson Hyde's  prayer dedicating Jerusalem as a gathering place for the Jewish people.

"Jerusalem as a city means everything to Latter-day Saints," Elder Holland said in a video from Mormon Newsroom. "It is the scene of the most significant moments of the Atonement and Resurrection."

During an address, Elder Holland acknowledged that the rabbis and Jewish leaders present probably "know better than I the promises made to Abraham, Isaac, and Jacob" as well as prophesies regarding the gathering of Israel, but then Elder Holland went on to explain events these leaders may not have known.

"In 1830, a 14-year-old boy named Joseph Smith prayed to know what God would have him do and had a divine manifestation instructing him, among other things, that it was soon time for the scriptural promises given to ancient Israel to be fulfilled and that he, Joseph Smith Jr., would be instrumental in restoring the priesthood and powers that would bring to fruition those prophecies.

"Following the dedication of the first Latter-day Saint temple built in the tradition of but not with the luxury of the temple of Solomon, the young prophet Joseph Smith, by then 30 years of age, was visited by a series of Old Testament prophets who appeared and initiated the fulfillment of many of the promises we have been referring to today. One visitor was the prophet Elijah in fulfillment of the ancient promise recorded by Malachi . . .

"We know that it is a cherished Jewish tradition to leave an empty chair for Elijah at Passover. We feel we understand that tradition better than any non-Jewish group in the world because part of our history involves the return of Elijah and the filling of that empty chair. Furthermore, Elijah’s return is crucial to Latter-day Saint theology, giving meaning to the 152 temples we have built around the world with many more to come."

“We are grateful to join together in this commemorative event, which is also a commemoration of our friendship and our desire to unitedly participate in certain humanitarian projects in the future,” Elder Cook said.

Lead image screenshot from the video above.