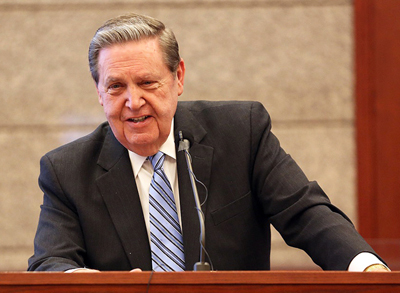 Recently, Elder Jeffrey R. Holland spoke at BYU's Education Week, and he didn't mince words as he tore down the popular tendency today to embrace spirituality but to reject religion. The following is an excerpt from the Deseret News.

Elder Holland spoke of the etymology of the word “religion,” recognizing its origins from the Latin word religare, meaning to “tie” or “re-tie.”

“For our purpose today, ‘religion’ is that which unites what was separated or holds together what might have been torn apart, an obvious need for us, individually and collectively, given trials and tribulations we all experience here in mortality.”

“Yes, in more modern times individuals can certainly be ‘spiritual’ in isolation, but we don’t live in isolation; we live as families, friends, neighbors and nations,” he said.