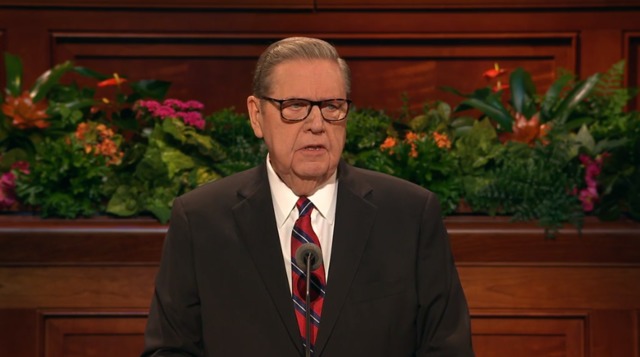 Our Church leaders placed a heavy emphasis on ministering during the October 2018 general conference. They discussed the deep meaning behind the “newer, holier approach” and taught that our brothers and sisters on this earth need us, and we need them.

Elder Holland gave a memorable talk during the April 2018 conference as he shared what the Lord wanted His children to know about ministering. He talked about truly loving one another and being willing to serve wherever and whenever needed.

He said, “Our prayer today is that every man and woman—and older young men and young women—will leave this general conference more deeply committed to heartfelt care for one another, motivated only by the pure love of Christ to do so.”

Latter-day Saints have worked diligently during the past six months to come to know, love, and minister to their ward members. This change has brought forth genuine connections, trusting relationships, and true friendships. Figuring out how to best minister to others can be a challenge, but we’ve made great progress.

The Ministry of Reconciliation

In the Sunday morning session of this general conference, Elder Holland discussed ministering again, but this time he talked about a different type of ministering. He spoke of the ministry of reconciliation with others, ourselves, and with God.

This is a meaningful perspective on the idea of ministering, as Jesus Christ is the ultimate example of loving and forgiving others. Elder Holland lovingly warns, “Our relationship to Christ will be determined or at least affected by our relationship to each other.”

He noted that old wounds and grievances no longer have room in our lives and we should forgive those who have wronged us. The Lord calls everyone to forgiveness saying, “I, the Lord, will forgive whom I will forgive, but of you, it is required to forgive all men” (D&C 64:10).

After reciting the Lord’s words about forgiveness, Elder Holland said, “It is, however, important for some of you living in real anguish to note what He did not say. He did not say, ‘You’re not allowed to feel true pain or real sorrow from the shattering experiences you have had at the hand of another.’ Nor did he say, ‘In order to forgive fully, you have to reenter a toxic relationship or return to an abusive, destructive circumstance.'”

As I heard those inspired words on Sunday morning, my heavy heart suddenly felt a little lighter. For those living in “real anguish” as a result of someone else’s choices, Elder Holland urges us to forgive. But he emphasized that in order to forgive, we don’t have to put ourselves in harmful situations.

We often hear the term “forgive and forget.” This implies that when someone wrongs us, we should forgive them and forget that it ever happened. This phrase can be problematic because it implies that the feelings we had surrounding the situation are insignificant or invalid. But Elder Holland uses a different phrase, “forgive and forsake.”

The word “forsake” means to abandon. You are allowed to feel all the feelings your heart is experiencing. Your experiences are valid and important, and your pain is absolutely real. But when we forgive and forsake, we forgive the person and abandon the negative feelings and pain caused by that person. You can forgive and leave your pain in the past.

The Science of Forgiveness

I took a conflict management class last summer and we discussed forgiveness often. We learned many of the same principles that Elder Holland spoke of, and we also learned that forgiveness is just as much (if not more) for yourself as it is for the other person involved.

The American Psychological Association published an article on how forgiveness effects mental and physical health. It states, “Forgiveness is linked to mental health outcomes such as reduced anxiety, depression and other major psychiatric disorders, as well as with fewer physical health symptoms and lower mortality rates.”

With medical proof to illustrate the physical benefits of forgiveness, it’s difficult to imagine why anyone would hold a grudge or harbor feelings of resentment for another person. But we fear that forgiving someone who wronged us will invalidate our very real feelings and excuse the other person’s behavior. This isn’t the case, as Elder Holland so gently reminded us. We are allowed to feel pain.

Pain, however, is not meant to last forever, and we were meant to be happy. The scriptures teach us, “Adam fell that men might be; and men are, that they might have joy” (2 Nephi 2:25). Elder Holland notes that the only way to “rise above” our pain is to walk the path of forgiveness and healing that Jesus Christ first walked.

Everyone makes mistakes. We’re living on earth so we can learn from them and become better every day. But the Lord is always there waiting for us to come unto Him and repent, and when we do, He accepts us and forgives our shortcomings with open arms. Christ is quick to forgive us even at our worst, and He asks that we do the same for our brothers and sisters. Elder Holland said, “My beloved brothers and sisters, I testify that forgiving and forsaking offenses, old or new, is central to the grandeur of the Atonement of Jesus Christ.”

Not only is forgiveness essential to becoming more Christlike, but forgiving with a desire to change through the Atonement will lift a burden and heal the soul as only Christ can. Elder Holland continued, “With the apostolic authority granted me by the Savior of the world, I testify of the tranquility to the soul that reconciliation with God and each other will bring if we are meek and courageous enough to pursue it.”

Note how he described forgiveness as an act of bravery. Forgiveness takes great strength and courage, and it’s an ongoing process we must work at every day. Harboring resentment is easy, and it’s exactly what Satan would have us do. But we understand that forgiveness is an essential part of God’s plan, and we must practice it to become more like Him.

Elder Holland concluded his talk pleading with Church member’s to repair old injuries and reconcile with each other and with God. “My beloved friends, in our shared ministry of reconciliation, I ask us to be peacemakers—to love peace, to seek peace, to create peace, to cherish peace. I make that appeal in the name of the Prince of Peace, who knows everything about being ‘wounded in the house of [His] friends’ but who still found the strength to forgive and forget—and to heal—and be happy.”

We don’t have to go back to toxic situations or harmful relationships to completely forgive. But forgiving others and forsaking resentment will bring us true happiness found only through the Atonement of Jesus Christ.