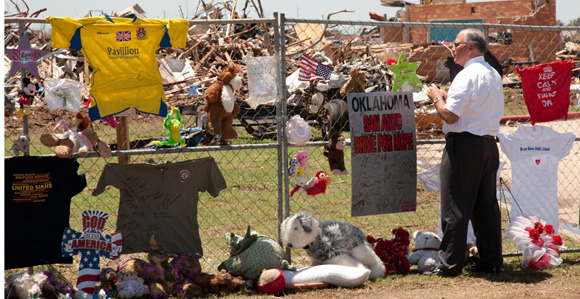 Elder Ronald A. Rasband of the Presidency of the Seventy landed on May 31, 2013, in tornado-ravaged Oklahoma City eager to learn stories of faith and service and to minister to those in need. Elder Rasband also carried a personal message for the Saints from President Thomas S. Monson.

Elder Rasband was particularly eager to meet Maylene Sorrels. Sister Sorrels had been at work as a kindergarten teacher’s aide at Plaza Towers Elementary when the category 5 tornado—the most destructive rank possible—demolished the school on May 20. She, with the kindergarten teacher, covered their students with their bodies. Though both women received injuries, no one else from the class was hurt. “When we heard the tornado coming close, I just prayed and prayed that my children (some of whom were also in the path of the storm) and the children we were protecting would be all right,” she said. “The Lord hears prayers. Prayers are answered.” Sister Sorrels’s home was badly damaged, but all of her family and the children with her were safe.