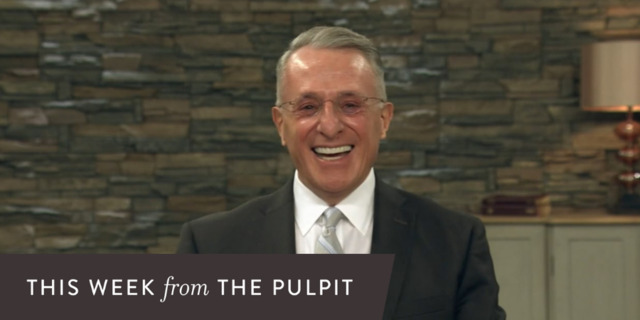 Editor’s note: “This week from the pulpit” highlights recent messages from General Authorities, General Officers, and leaders of the Church. This story has been updated throughout the week. Find summaries of remarks below or use the menu to jump to a specific section.

Speaking of “from the pulpit" has become ironic in the midst of a pandemic, as the pulpit spoken of is often the same. But despite the fact that many Church leaders are speaking from the same pulpit located somewhere inside the Conference Center in Salt Lake City with the same stone backdrop, technology has allowed them to speak to Latter-day Saints all over the world.

Sharing one example from his own life, Elder Soares said that he and his wife, Sister Rosana Soares, “have experienced an increase in our faith and felt strengthened by each other’s comments as we delve deeply into the scriptures. We have felt more delight in the Lord, and we are learning how God can prevail in our lives.”

Speaking of personal revelation, he said, “Let us ask for more wisdom, let us find our sacred grove, a quiet place we can regularly go and pour out our heart about our concerns, our fears, and our weaknesses—as President Nelson says, ‘the very longings of our heart.’ Then let us listen and record the feelings and thoughts that come to us and the actions we are prompted to take.”

He continued, “God really wants to open the heavens for us. The Lord is always ready to assist us in receiving the answers we are looking for and the guidance we are seeking. . . . The privilege of receiving personal revelation is one of the greatest gifts of God. I can assure you there are great things that our Father in Heaven wants us to know.”

Elder Ardern encouraged those watching to “record our most powerful, spiritual experiences.” He also spoke of the power of the Book of Mormon.

Sister Craven spoke of the role of faith in a disciple’s life, saying, “Faith in the Savior and His Atonement is a spiritual gift, and it’s necessary for our salvation.”

Read more from the talks on Church Newsroom Pacific.

Several other General Authorities have also posted recently about their ability to meet with and speak to Latter-day Saints across the globe via technology.

President Henry B. Eyring wrote on Facebook, “It was so wonderful to recently share some thoughts with young adults in the New York area via videoconferencing. Like them, many of you young people may wonder what your future holds. You may look around at what’s happening in the world and feel discouraged and even find it hard to remain optimistic. . . . Do not focus on the commotion around you; it often looks worse than it actually is. You may not know what the future holds or where your path will lead, but I assure you that the Lord loves you and you are not alone.”

It was so wonderful to recently share some thoughts with young adults in the New York area via videoconferencing. Like...Posted by Henry B. Eyring on Friday, December 4, 2020

President M. Russell Ballard expressed appreciation for technology while also issuing a word of caution: “I am amazed at how technology can facilitate the work of the Lord. Just a few months ago, I was able to meet virtually with many of our faithful members in Cusco, Peru. Technology and mobile electronic devices are a blessing, but they can also distract us from hearing the still, small voice. They need to be our servants, not our masters.”

I am amazed at how technology can facilitate the work of the Lord. Just a few months ago, I was able to meet virtually...Posted by M. Russell Ballard on Sunday, December 6, 2020

The Primary General Presidency also highlighted adjustments that have been made since the beginning of the pandemic to allow Primary to continue to minister to children worldwide.

A few highlights? Primary leaders in the Bocaue Ward in Valenzuela, Philippines encouraged children to memorize the 13 Articles of Faith with incentives and had the children record themselves reciting them. In Peru, one Primary president personally visited each Primary child's home and taught a short lesson through the window. The Bel Aire Ward in the Derby Kansas Stake has hosted a drive-by ice cream activity. The Sierra Vista 4th Ward in the Sierra Vista Arizona Stake hosted a drive-in movie in the Church parking lot. Meanwhile, the Allfrey family of Lehi, Utah, took the opportunity to bring their family closer by having an online primary with their cousins.

“(Primary leaders are) involving the children in some miraculous ways. Now, I know that it is a little different everywhere. I just wish I could hug every single Primary leader and teacher and music leader who has been so prayerful and so mindful of these precious children,” President Joy D. Jones told Church News. “We’re deeply grateful for their loving efforts to support home and family as they seek heavenly guidance in ministering to  the children in their units.”

For many families, the First Presidency Christmas devotional has become a treasured part of the Christmas season. This year’s devotional was no exception as members of the Church were able to hear from President Russell M. Nelson, Elder Jeffrey R. Holland, Sister Becky Craven, and Elder Brent H. Nielson. All shared sweet Christmas thoughts celebrating the true meaning of the season. President Nelson, Elder Holland, and Sister Craven all shared clips from their talks on social media.

Monday morning it was announced that four temples (all outside of the United States) will soon enter Phase 3 of reopening. Accompanying the announcement were three videos from Elders Dale G. Renlund, David A. Bednar, and Gary E. Stevenson as well as a social media post from President Nelson.

► You may also like: Some temples will soon begin Phase 3 of reopening. What does this mean?

My friends, I am thrilled to be able to share the news that we will soon see the limited reopenings of selected temples...Posted by Russell M. Nelson on Monday, December 7, 2020

Elder Gary E. Stevenson reemphasized President Russell M. Nelson's invitation to “Hear Him.” He shared multiple examples from the scriptures of God the Father introducing His Son. Specifically, he cited the Mount of Transfiguration, the voice of the Father as the resurrected Christ appeared in 3 Nephi 11, and finally the example of the First Vision.

"Think about how you hear Him," Elder Stevenson said. "Consider the ways that you can continue to grow and develop and grow spiritually and help your family and your loved ones. You might want to write down some of the things that you will do to more fully hear the voice of the Lord."

Read more from Elder Stevenson's address here. You can also watch his talk in the video below.

The Path to Discipleship

Speaking to students at Brigham Young University via technology, Elder Scott D. Whiting of the Seventy taught that discipleship is not a linear point from point A to point B. Instead, the path has highs and lows, and as Elder Whiting said, “Instead of seeing the low points as crises, we can instead consider them as part of the journey that we all must travel.”

He went on to suggest five ways to “deepen your discipleship.” Read them here.

The year 2020 has been hard regardless of where you live but for Latter-day Saints in the Southeast, “few weeks passed during the 2020 hurricane season when members were not offering their time, treasure and talents to assist anyone in need,” according to Elder Douglas B. Carter, an Area Seventy, as reported by Church News. The article goes on to emphasize that “about 75 percent of the members living along the U.S. Gulf Coast had opportunities to both help and receive help within a 90-day period.” Read more on Church News.

As we look forward to possible Christmas gatherings of our families, we need to remember the cautions we have been given...Posted by Dallin H. Oaks on Tuesday, December 8, 2020

I first understood the full significance of the Atonement of Jesus Christ when my grandfather was dying. I was 26 years...

One way children can #LightTheWorld this Christmas season is by learning about those who lit the way before them—their...Posted by Joy D. Jones on Thursday, December 10, 2020

I don’t know about you, but I find myself still reflecting on President Russell M. Nelson's gratitude challenge he gave...Posted by Bonnie H. Cordon on Thursday, December 10, 2020

Worthwhile endeavors take much time and much effort. The Salt Lake Temple took 40 years to build! The pioneers...Posted by Michelle D. Craig on Monday, December 7, 2020