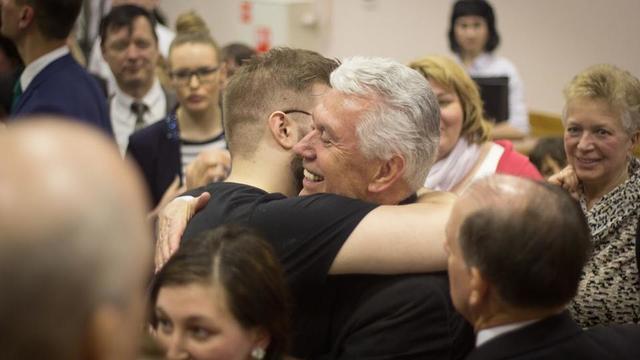 While speaking with a Russian journalist, Elder Dieter F. Uchtdorf bore a powerful testimony of what temples mean and what Latter-day Saints do in temples.

During a recent visit to Eastern Europe, Elder Dieter F. Uchtdorf of the Quorum of the Twelve Apostles of The Church of Jesus Christ of Latter-day Saints encouraged members in Russia to prepare their hearts for a new temple. President Russell M. Nelson recently announced that a new temple will be built in a major Russian city yet to be determined.

Elder Uchtdorf and his wife, Harriet, participated in a special conference of the Moscow Russia Stake on April 22, 2018. The meeting was attended by about 700 Latter-day Saints, including Church leaders in the region.

After the conference, Elder Uchtdorf and Elder Alexey V. Samaykin, an Area Seventy, were interviewed by historian, publicist, well-known journalist and editor in chief of the academic journal Science and Religion, Sergey Georgievich Antonenko.

“This announcement is a historic one and it’s a beautiful one,” said Elder Uchtdorf about the new temple to the journalist. “We have around the globe 159 temples, and the number is growing.”