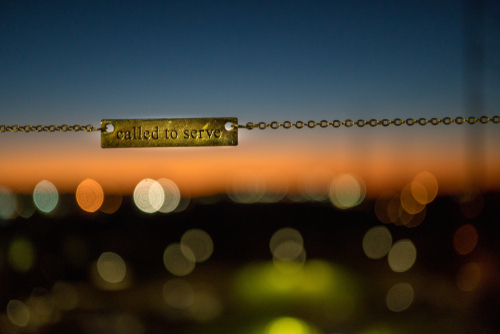 FHE: Be A Missionary

"After these things the Lord appointed other seventy also, and sent them two and two before his face into every city and place, whither he himself would come" (Luke 10:1).

Materials needed: A flashlight with a strong beam, a hand mirror.

Application: Briefly discuss our responsibility to share the gospel with others. Liken the gospel of Jesus Christ to a flashlight beam. We are like the mirror and can reflect his light to others. At times it can be difficult to reach certain individuals, but with time and effort, the gospel light can be reflected (or shared) even in the farthest corner.

Discuss the importance of sharing the gospel with everyone. How would you feel if you had been left out?

In 1991, John Stohlton had just begun to serve as president of the Australia Melbourne Mission along with his wife, Colleen. During a conference, President Stohlton pointed to an elder he didn't yet know well and asked him to read a scripture. The missionary began to rise to his feet when his companion reached out and grabbed his shoulder, as though to hold him down. The elder shrugged off his companion's grasp and stood anyway. He then read the scripture, slowly but accurately.

President Stohlton thought little more of this until that afternoon, when the senior companion took an opportunity to bear his testimony. He started by saying, "Today you saw a miracle," and then he explained what he meant.

President Stohlton [eventually] learned the whole story. The missionary he had called on and the elder who had tried to stop him were actually brothers, named Chapman. They were from Perth, Australia, the sons of a stake president.

The second son, Adam, was also considered slow in school. He was eventually diagnosed as dyslexic. When he left school, he could hardly read at all. But when President Chapman set Adam apart as a missionary, he blessed him that he would be able to read and comprehend the Book of Mormon. When Adam arrived in the mission field, he was placed with his brother, Peter, so that someone who understood his difficulty could help him get by. He had been on his mission only a short time when President Stohlton called on him at the conference to read the scripture.

For a dyslexic, written symbols reverse themselves in the reader's mind and confusion sets in. Without knowing anything of this condition, President Stohlton had called upon the young missionary to read in front of a sizable group, and his older brother had tried to save him the embarrassment that was sure to follow. But young Adam Chapman trusted in his father's blessing, and he stood and read the words. What Peter knew was that Adam had never before been able to do such a thing—and that a miracle had occurred.

This was only the beginning. In the following months, Adam Chapman read the Book of Mormon from cover to cover. He understood everything he read. At the same time, his confidence took a great leap forward.

Adam Chapman served a fine mission. He had a wonderful, sweet spirit, and he was always willing to do whatever was asked of him.

Print out a picture of missionaries (such as picture 612 in the Gospel Art Kit on lds.org). Cut the picture into 24 squares. Number the backs of the squares from one to twelve, repeating the numbers so you have two sets, numbering one to twelve. Mix up the pieces and place them with the number side down, so that you see a scrambled picture. Turn over two pieces at a time, trying to match numbers. When the numbers match, keep those two pieces to build the picture. If they don’t match, turn them back over leaving them in their original spot. The game continues until all the pieces are matched and the puzzle is completed.

Click here to get the PDF of this lesson.