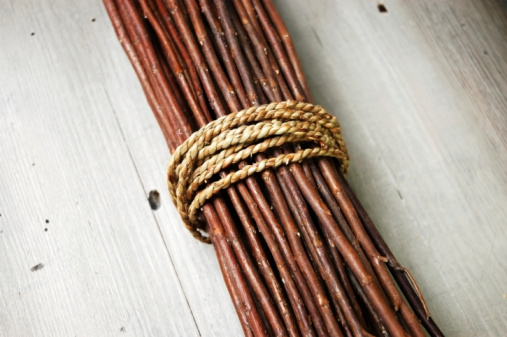 FHE: Bringing Comfort to Others

Let our hearts and hands be stretched out in compassion toward others, for everyone is walking his or her own difficult path. (Dieter F. Uchtdorf, "You Are My Hands," Ensign, May 2010, 68–70, 75.)

Yea, and are willing to mourn with those that mourn; yea, and comfort those that stand in need of comfort, and to stand as witnesses of God at all times and in all things, and in all places (Mosiah 18:9).

The ancient moralist Aesop used to illustrate the concept of unity by holding up a stick and asking for a volunteer among his listeners who thought he could break it. Of course the volunteer was able to break the stick easily. Then Aesop would put two sticks of the same size together and would ask the same volunteer to break them both at the same time. It was more difficult, but usually it could be done without too much trouble. The process was repeated, with another stick being added to the bundle each time, until the volunteer was unable to break the bundle of sticks. The moral to Aesop’s illustration was simple: individually we are weak, but together we are strong.

Have someone read Mosiah 18:8 and explain what this object lesson has to do with our church membership. What are some things you have done to bear another person’s burdens? Why do you think Heavenly Father wants us to help each other like that?

From the first organization of the Relief Society in Cache Valley, until 1880, I labored as a teacher. On December 11, 1880, I was put in as president of this organization in the Second Ward, with Sister Barbara Larsen as first counselor and Sister Susan J. Smith as second counselor, and Sister Emmeline James as secretary. I labored in this capacity for over thirty years. During these years I tried to do my duty in caring for the sick and comforting the needy.

I have walked for blocks through the deep snow; I have been out in rains and winds, in the darkest nights, and in the earliest hours of the morning, to comfort and minister to those who were afflicted and who were sick and suffering and sorrowing and dying. I have sat up all night time after time with the sick, laid out the dead, made burial clothes, mothered the orphans, comforted the widows, and given advice to those in need. I have tried to be a peacemaker to those in trouble and through it all the Lord directed me and I enjoyed His Spirit as my companion in my labors.

Many an afflicted one has gone to her last sleep blessing me and many who yet remain bless me for services rendered unto them. It comforts me to have done some good to those less fortunate than myself.

Use your imagination. Have the family ponder and share ideas generated from the following questions (or think of your own).

Coat a 9 x 13-inch pan with nonstick cooking spray. Sprinkle with nuts then layer apple slices over bottom of pan. Roll thawed dough balls in cinnamon and arrange over almonds and apples. Or, if using dough from Lion House Dinner Rolls, divide dough into 3 equal portions and shape 2 of those portions into 12 dough balls; roll in cinnamon and arrange over almonds and apples. Sprinkle dry pudding mix over dough balls and drizzle with the syrup and butter. Cover with a clean towel or plastic wrap and let rise until doubled in size, 1 to 1 1/2 hours. Bake at 375 degrees for 20 to 30 minutes. Invert pan onto serving plate. Serves 12.