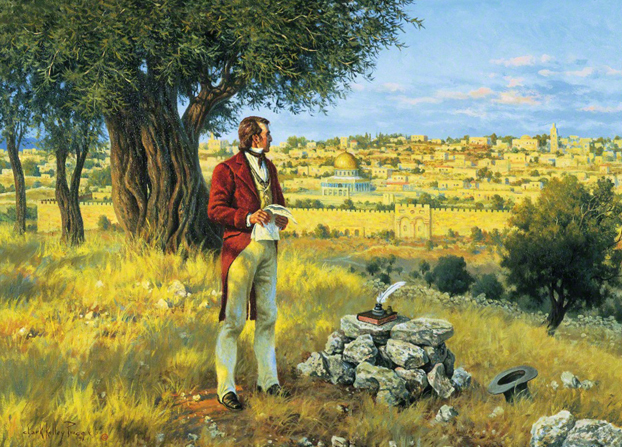 Conference Talk: For more information on this topic read "The Truth of God Shall Go Forth," by M. Russell Ballard, Ensign, Nov 2008, 81-84.

Thought: Nearly 18 decades have passed since the organization of The Church of Jesus Christ of Latter-day Saints in 1830. We have had 178 years to observe the fulfillment of prophecy and to watch "the truth of God" as it goes "forth boldly, nobly, and independent" (M. Russell Ballard, "The Truth of God Shall Go Forth," Ensign, Nov 2008, 81-84).

Scripture: "The word of the Lord concerning his church, established in the last days for the restoration of his people, as he has spoken by the mouth of his prophets, and for the gathering of his saints to stand upon Mount Zion, which shall be the city of New Jerusalem.Verily this is the word of the Lord, that the city New Jerusalem shall be built by the gathering of the saints, beginning at this place, even the place of the temple, which temple shall be reared in this generation" (Doctrine and Covenants 4:2, 4).

Lesson: When each item [in the activity] has been guessed, have your family guess what these items have in common. To find out, read the section heading for D&C 17; D&C 17:1; and the "Testimony of the Three Witnesses" at the beginning of the Book of Mormon. Ask your family how they would feel if they were given an opportunity to see those sacred things (Dennis H. Leavitt and Richard O. Christensen, Scripture Study for Latter-day Saint Families: The Doctrine and Covenants, [Salt Lake City: Deseret Book, 2004], p. 33.).

Story: Joseph and Oliver were warmly welcomed at the Whitmer home, but it was hard for Mrs. Whitmer to have them there. She had a large family of sons with just one daughter living at home to help with all the housework. The two of them had to prepare all the meals, plant and tend the garden, bake the bread, churn the butter, make and mend the clothing, and do much of the other work on the farm. Mrs. Whitmer did not complain, but she wasn't sure she could take care of two more people. One day she felt very discouraged as she went out to milk the cows. Before long she came back to the house filled with joy. When asked why she looked so happy, she replied, "I have seen the messenger." She went on to say that she had come upon an elderly man out near the barn. Her description of him showed he was the same man . . . that Joseph, Oliver, and David had seen on their journey from Pennsylvania. Mrs. Whitmer said the man told her that she would be blessed for providing a safe place for Joseph and Oliver to work. Then he took out the golden plates and showed them to her. "They were fastened together with rings on the right side so that the pages would turn over from left to right," she told her family. The man turned several of the plates, leaf by leaf. She, Mary Musselman Whitmer, was the first person besides Joseph to actually see the golden plates. Seeing them was her own personal reward for taking care of Joseph and Oliver. But soon other people would see them for a different purpose, to be witnesses to the world (Richard E. Turley and Lael Littke, Stories from the Life of Joseph Smith [Salt Lake City: Deseret Book, 2004], p. 79.).

Activity: Write the following words or phrases on separate slips of paper: "Gold plates," "breastplate," "sword of Laban," "Urim and Thummim," "Liahona," and "angel." Give each family member one or more slips of paper. Have them take turns describing the item to the rest of the family (without saying the word on the slip of paper) until someone guesses what the item is (Dennis H. Leavitt and Richard O. Christensen, Scripture Study for Latter-day Saint Families: The Doctrine and Covenants, [Salt Lake City: Deseret Book, 2004], p. 33.)