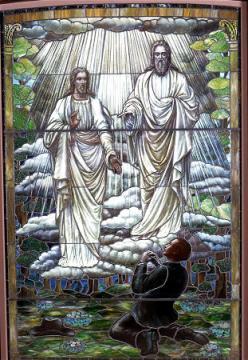 Thought:
A consecrated life is a life of integrity. We see it in the husband and wife “who honor marital vows with complete fidelity.” We see it in the father and mother whose demonstrated first priority is to nourish their marriage and ensure the physical and spiritual welfare of their children. We see it in those who are honest. (Elder D. Todd Christofferson, “Reflections on a Consecrated Life” Ensign, Nov 2010, 16.)

Scripture:
God forbid that I should justify you: till I die I will not remove mine integrity from me. My righteousness I hold fast, and will not let it go: my heart shall not reproach me so long as I live. (Job 27:5-6)

Lesson:
Explain to your family that Integrity can be defined as having your actions match what you know is right. Read the six scenarios and ask family members to respond with the correct action for each situation.

1. Stephanie went grocery shopping with her mom. While she was at the store, she saw a candy bar that she really wanted. Stephanie didn’t have any money. She put the candy bar in her pocket anyway. Was this right? What should Stephanie do?

3. Megan was having a hard time in her math class at school. The final exam was coming quickly and she hadn’t studied for it. Her best friend, Lisa, said Megan could look at her answers during the test. Is Megan being honest? Is Lisa being honest? What should they do?

4. Amy told her best friend, Melissa, a personal secret. Melissa promised not to tell anyone. When Amy wasn’t around, Melissa told Amy’s secret to others. Was this right? What should Melissa do?

5. Cory and Daniel were good friends at school. Cory always talked about the pets he had at home. Daniel doesn’t have any pets, but he told Cory he has a dog and talked about his dog all the time. Is this honest? What should Daniel do?

6. Matthew used Dad’s tools to try to fix his bike, then he left them out. When Dad got home, he couldn’t find his tools and asked if anyone had seen them. Matthew didn’t say anything. Is this showing integrity? What should Matthew do?

Story:
For several days [after the first vision, the young] Joseph [Smith] thought about what had happened. The uncertainty of mind he had felt changed to peace, love, and joy. He wanted to talk to someone who would appreciate his experience. One day while he was out, he saw a preacher who had been very friendly to him. He was sure the preacher could offer him some good advice.

“Is something on your mind, Joseph?” the preacher asked. “You seem about to burst.”

Joseph nodded. “I have something to tell.” Speaking softly, he told of his vision in the grove.

After the preacher heard the story, he said, “Joseph, my boy, you know as well as I do that there are no visions and revelations anymore. Such things ended with the Bible prophets.” He leaned toward Joseph, looking into his eyes. “What you have experienced is straight from the devil. The sooner you forget about it, the better.”

Joseph hurried away. He knew what he had seen, and he knew it had not come from the devil. Far from it. He could not deny the truth.

Before long, word of what he’d told the preacher got around. People didn’t believe what had happened to him. They laughed and turned against him. Even his friends made fun of him. “Here comes Joe Smith,” they said. “He sees things no one else does.” They began calling him “Holy Joe.”

The neighbors, who had been friendly before, gossiped about him. They teased him about “getting religion.” Some people called him crazy. Terrible lies were told about him and his whole family.

Even when adults came to Joseph and told him to lie and deny the things he had seen, he still told the truth. He was beaten and persecuted for telling the truth, and he was still honest. Joseph Smith was a great hero, and we can look up to him and follow his example. Even when people around us don’t know we are lying, we need to remember that Heavenly Father knows the truth and we can’t hide our actions from him.

Activity:
This tag game is called Sneaky Snakes. One of Satan’s names is “that old serpent” (D&C 76:28) and another of his names is “the father of . . . lies” (Moses 5:24). This game can help us remember to avoid being sneaky and dishonest like a snake.

Begin by designating the boundaries of the play area, not too large or too small. One person is chosen to be “It.” He chases the other family members around the designated playing area. When he tags another person, that person becomes a snake. Once you become a snake, you must lay down on the ground where you were tagged and move your arms and legs back and forth to wiggle across the floor trying to tag other players. The players must run from “It” as well as avoid being tagged by the wiggling snake. When someone else is tagged by “It” or by a snake, he or she becomes another snake to help catch the other players. The last person left standing is the winner. He or she becomes “It” for the next round.

In a bowl, combine yeast, sugar, and warm water; stir to dissolve. Set aside. In a saucepan, scald milk. Add oil, sugar, and salt; stir to dissolve sugar. Pour milk mixture into a large mixing bowl, and add egg and 1 cup of the flour to make a paste. Stir in yeast mixture. Add remaining flour to make a soft dough. On a floured board, roll out dough about 1/2 inch thick. Place dough on a greased cookie sheet, and let rise in a warm place for 10 minutes.

For Streusel topping: In a bowl, combine flour, sugar, and cinnamon. Cut butter or margarine into flour mixture to resemble size of peas. Sprinkle on Apple Streusel as directed above.