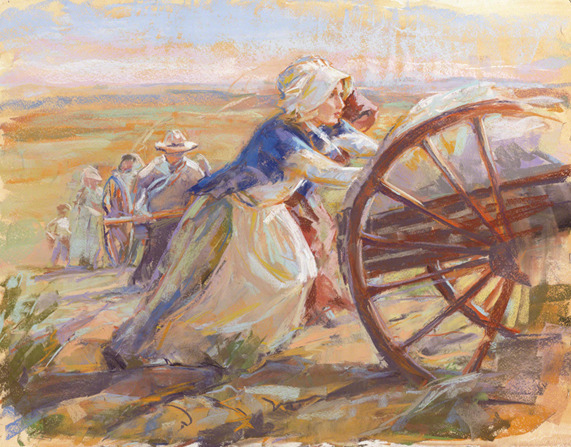 This lesson help is based on the book, Pioneer Children Sang As They Walked by Jessica Warner.

Recounting the faith of that great band of early Saints, Elder Ben E. Rich said, “This country was unknown to them. They believed that God had given to President Young a vision of the future home for the Latter-day Saints. They had faith in their leader, and they were willing to go into the unknown with him. … Who should ever forget the faith, … the bravery, of those who had such confidence in Brigham Young as to follow him into these valleys of the mountains.”

As modern-day pioneers looking to the future, we must be willing to go into the unknown, having the same confidence and commitment in following President Hinckley and the other constituted authorities of the Church.

(President James E. Faust, "Pioneers of the Future: 'Be Not Afraid, Only Believe,'" October 1997 general conference)

Scripture: Let no man despise thy youth; but be thou an example of the believers, in word, in conversation, in charity, in spirit, in faith, in purity (1 Timothy 4:12).

This story comes from “On His Own Two Feet” by Lisa M. Grover, March 1998 Liahona.

When many of us think about pioneers, we think about the long walk to the western United States 150 years ago—and the blisters, exhaustion, and frozen toes that came with all that walking.

Cesar Gaspar, a 15-year-old from Guadalajara, Mexico, has never ridden in a covered wagon. He’s never pushed a handcart, and he’s never been to the United States. But he knows all about walking. He walks to seminary, to school, to church, to activities, and home again. Walking is a constant in Cesar’s life.

“Sometimes I feel like that’s all I do,” he says with a smile. He’s not complaining. It’s just a fact. But walking isn’t all this young man has in common with the early pioneers.

Cesar began looking for the gospel without realizing it. Although he was already active in a church, Cesar became interested in other religions and started taking his first steps toward the restored gospel. [...]

“One day [a friend] mentioned that she was a member of the Church,” says Cesar. “I got very interested and started asking her what her beliefs were, what her principles were.”

Soon Cesar needed to know more. He followed Betty’s brother home from school one day. After building the courage to knock on the door, Cesar was invited into the house, and Betty and her family talked with him about what it means to be a Latter-day Saint. [...]

Soon Cesar had a copy of the Book of Mormon—compliments of the Garcia family—and lots of questions. [...]

[His first meeting with the missionaries] led to more discussions during the week. By Thursday, the bishop had interviewed Cesar, and the following Sunday—exactly one week after his first attendance at Sunday meetings—Cesar was baptized.

“It was pretty fast,” Cesar admits, “but by that time I had already read the Book of Mormon. Before meeting the missionaries, I had also read Doctrines of Salvation, Truth Restored, and The Miracle of Forgiveness, and I had started Jesus the Christ. I felt ready.”

That was two years ago. Cesar is the only Church member in his family. It would be easy for him to miss church once in a while or to decide against attending seminary—especially since he almost always has to walk to get there! But he doesn’t even think about that. Instead, he thinks about the people who see what he does.

“I have to be an example to my family,” he says. “I try to be as perfect as I can because I know they’re watching me.”

Teach your family about the sacrifices pioneers made and the faith they had, using stories from your own ancestors or from resources such as Pioneer Children Sang As They Walked, or History of the Saints: Gathering to the West. Think about the blessings these pioneers saw in their lives, and about what you would do in their situation.

Here are a few points that you can include in your discussion:

1. Learn from past pioneers

It’s important to learn from the examples of those who have come before us. The more we learn about the early Mormon pioneers, the more appreciation we’ll have for the blessings we enjoy today because of their sacrifices.

Surely there are others in your life--family or friends--who have set an example for you in some way. There are countless examples of people in the world today who make difficult decisions to pave the way for future generations by living the gospel of Jesus Christ.

3. Remember that you are a pioneer

We must each commit to being a pioneer in our own way--to mark the path for those who will follow after us. Every time we demonstrate faith and courage in the face of adversity, we pave the way for others to do the same.

“The Elements” is a game children played on their journey to the Salt Lake Valley.

Everyone sits in a circle. One player throws a handkerchief in the air and calls out one of the elements: air, earth, water, or fire. If air, water, or earth is called out, the person whom the handkerchief touches must name a creature that belongs to that element before the caller counts to ten (such as water--eel; air--falcon). If any player calls out fire, everyone must be silent because no creatures live in that element! The one with the handkerchief then tosses it and calls out another element. If an answer is incorrect, has already been named, or if time runs out, that player must forfeit.

What other activities do you and your family participate in to remember the pioneers? Tell us in the comments!

Your children will love learning about pioneer children through this fascinating story book!

Beautiful, full-color artwork illustrates how more than 25,000 children took part in the legendary exodus from Nauvoo, Illionois, to the Salt Lake Valley.

Discussion questions and a glossary of key words encourage family learning and discussion as readers relive this historic, faith-driven journey—and discover how children participated every step of the way.

-->Buy a copy for your family today!