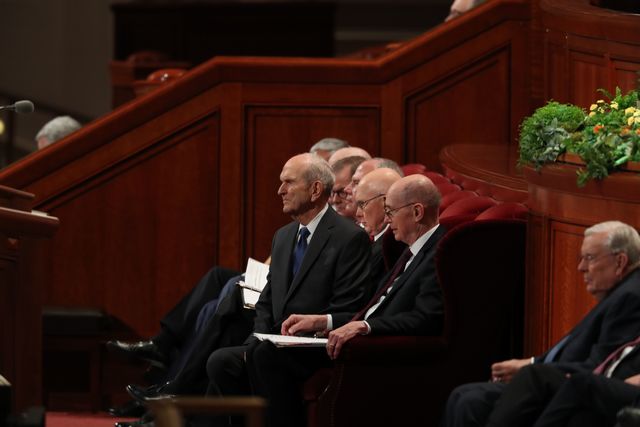 For more information on this topic read "Looking Back and Moving Forward," by Thomas S. Monson, Ensign, May 2008, 87-90.

Surely the Lord God will do nothing, but he revealeth his secret unto his servants the prophets (Amos 3:7).

How we respond to the prophet's counsel is a good indication of how committed we are to the Lord. Have Dad (or Mom or another family member) play the role of the prophet Samuel. He can stand on a table, at the top of the stairs, or somewhere else where he is higher than the rest of the family. He will then call out to the family, admonishing them to live gospel standards. The family, on the other hand, will role-play the part of the wicked Nephites who refused to hearken to the prophet. They will refuse to keep the standards and will attempt to hit the prophet (Dad) with stones (marshmallows). For example, Dad could say, "The Lord commands you to dress modestly." The family would respond, "No! We don't care what the Lord wants. We won't dress modestly!" Dad could say, "Don't date until you're 16." The family could shout back, "We will date when we are 15 if we want to!"

At the end of the activity, ask the family how it felt to reject the prophet. Read in the Book of Mormon about the consequences the Nephites faced for rejecting Samuel the Lamanite and stoning other prophets in their day (3 Nephi 9:1-4, 10-12).The consequences for not following the prophet today are just as serious.

The Savior is coming soon and we need to be prepared. The prophet is like a watchman on a tower. Just like Samuel the Lamanite, he is standing on higher ground and can see farther ahead. He is a prophet, seer, and revelator, which means that Heavenly Father shows him the future and lets him know what we need to do to be prepared. Even if we aren't physically throwing rocks at the prophet, we are still rejecting him when we do not do what he says (Deborah Pace Rowley, Before They Turn Twelve, [Salt Lake City: Deseret Book, 2007], p. 6).

I remember being in New York when President [David O.] McKay returned from Europe. Arrangements had been made for pictures to be taken, but the regular photographer was unable to go, so in desperation, the United Press picked their crime photographer—a man accustomed to the toughest type of work in New York. He went to the airport, stayed there two hours, and returned later from the darkroom with a tremendous sheaf of pictures. He was supposed to take only two. His boss immediately chided him. "What in the world are you wasting time and all those photographic supplies for?" The photographer replied very curtly, saying he would gladly pay for the extra materials, and they could even dock him for the extra time he took. It was obvious that he was very touchy about it. Several hours later the vice-president called him to his office, wanting to learn what happened. The crime photographer said, "When I was a little boy, my mother used to read to me out of the Old Testament, and all my life I have wondered what a prophet of God must really look like. Well, today I found one" (Edited by Jay A. Parry, Jack M. Lyon, and Linda Rire Gundry, Best-Loved Stories of the LDS People, Vol. 2, [Salt Lake City: Deseret Book, 1999]. p.390).

Obtain pictures of several latter-day prophets (from the Gospel Art Kit or lds.org). Have a family member select one picture without the others seeing which one they selected. The other family members ask yes and no questions (such as "Does he have a beard?" "Is he wearing glasses?" etc.) to determine which prophet they have chosen.

This family resource will help parents teach the standards of the Church to children BEFORE they are teenagers. It features one lesson devoted to each of the standards found in the For the Strength of Youth booklet, such as “Honesty,” “Dress and Appearance,” “Gratitude,” “Entertainment and Media,” and “Sabbath Day Observance.” It also includes stories, activities, object lessons, games, and refreshment ideas to make learning the standards engaging and fun. Before They Turn Twelve is ideal for Monday night lessons, Sunday time discussions, and preparing for Primary talks. Great for families with children ages 5 to 12. Available at Deseret Book stores and on deseretbook.com.

Here's an outstanding collection of all those inspiring stories from Church history that you've heard and wanted (but couldn't find) for your class. A companion volume to Best-Loved Poems of the LDS People, Best-Loved Stories of the LDS People includes accounts of everything from Joseph Smith's childhood leg operation to David O. McKay's mission experience of learning "Whate'er Thou Art, Act Well Thy Part."

More than 200 other stories are included, such as Joseph F. Smith's encounter with a rough anti-Mormon in "True Blue, Through and Through" and "Fooling a Bulldog," by Parley P. Pratt. You'll find stories about faith, answers to prayer, and revelation, courage, honesty, and many other gospel principles and doctrines. A valuable reference that belongs in every Latter-day Saint home. Available at Deseret Book stores and on deseretbook.com.