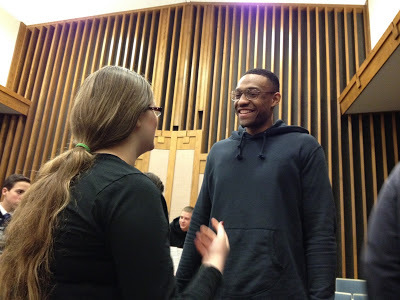 At six feet nine inches tall, Latter-day Saint Jabari Parker stands out from the crowd. And it's not only because of his height. It's because of his faith and the way he's chosen to live his life, which often goes against what is typical of those in professional sports.

Parker is just 20 years old, but already he has been named the National High School Player of the Year, the USBWA National Freshman Player of the Year (during his only year of college basketball at Duke), was the second overall pick in the 2014 NBA draft, and has been featured on the cover of Sports Illustrated for the influence Mormonism has had in his life.

As the Milwaukee Bucks' Forward, Parker travels constantly, and he recently stopped to hold a devotional with LDS youth in Vancouver, Washington.

“We have to acknowledge God, and remember that everyone is a child of God,” he said, according to Lacamas Magazine. “You have to have compassion and be a team player on the court, and recognize that we all make mistakes. We’re not perfect, so don’t judge.”

During the 90-minute session, Parker told the audience the way he maintains his faith while playing in the NBA: “These choices were made a long time ago, choices not to drink and to obey the law of chastity,” he told the youth during a Q&A.

There's a lot about Parker that makes him unique and that has helped him change stereotypes about the Church and its members.

The LDS Church has influenced Parker's life in more ways than just spiritually--it's where he learned to play basketball. As a young boy, he and his brother Christian would go to the gym at their LDS meetinghouse in Hyde Park, Chicago, to avoid the dangers of playing outside. This allowed him to play all through the night at times.

"The church was our safe haven," Christian told Sports Illustrated. Jabari added: "There were images of Christ everywhere. There was a special spirit there, because we were at a church."